How Michael Jordan Could Revolutionize The NBA (Again) 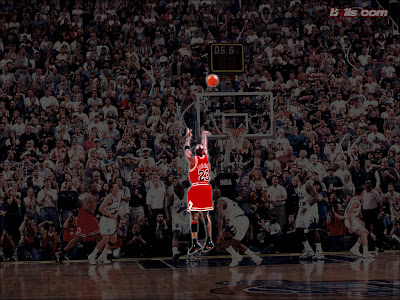 Michael Jordan, the greatest player to ever lace 'em up in the NBA, had himself quite a Hall of Fame speech on Friday. Was he cocky?  Yeah.  But can you blame him?  He single-handedly kept Karl Malone, John Stockton, Reggie Miller, Patrick Ewing, Charles Barkley and Gary Payton without a NBA championship ring.

For those of you keeping score at home, don't adjust your computer screen, Michael Jordan's presence in the league stopped six future Hall of Famers from winning championships. Guys like Hakeem Olajuwon, Clyde Drexler, David Robinson and Shaquille O'Neal didn't win championship rings until after Jordan retired.  In his career, Jordan broke more hearts of Cleveland sports fans than Art Modell.  Think about it.


Anyway, the guys over at my old stomping grounds put forth a rather interesting banter question.  Could Michael Jordan cut it in today's NBA?  My answer is a resounding yes.  But how?

Well, listening to my pitch would be a good start.


Jordan can revolutionize basketball by creating his own position.  He could be basketball's first closer.

In the last few years, athletes fans have grown accustomed to players trying to get the most out of their bodies as their careers inch closer and closer to the white light.  Roger Clemens sat out the first few months of the season to save his (allegedly) roided up arm for a pennant push.  Brett Favre avoided training camp with the Vikings like an annoying one-night stand to save his body for the rigors of a 16-game NFL season.

But instead of saving himself for a late playoff run, Jordan can save himself for late-game situations.  All Jordan has to do is look at the sport he loved (baseball) to see how many pitchers extended their careers by going to the bullpen.  That's exactly what His Airness would be doing.  He'd be a hired gun that would be called upon when his team needed him the most.

This would have been the ideal plan after he came out of his second retirement.  Imagine a team entering the fourth quarter with a slim deficit, tiring down the stretch, looking for a way to pull out a nail-biter.  The coach looks at the end of his bench and sitting there is the single greatest closer in NBA history, itching to get the ball.  Jordan tore opposing defenders up throughout his Hall of Fame career, but could you imagine how badly a fresh M.J. in the fourth quarter could have torched opponents.

The thought of it would probably give Craig Ehlo night terrors.

If successful, Jordan could have paved the way for today's elite game finishers to extend their careers.  Guys like Kobe Bryant, LeBron James, Carmelo Anthony and Paul Pierce could save their stuff for the guts of the game when their teams need them the most.

Somewhere, David Stern is on the horn with Mike pitching this exact suggestion.

Great article but I would strongly argue that Reggie Miller is the greatest closer of all time, Jordan being right there though. Imagine it, Jordan as a setup and Miller as a close, extend the bench to 14 player...Priceless.