Is Terrell Owens The Missing Piece In Chicago? 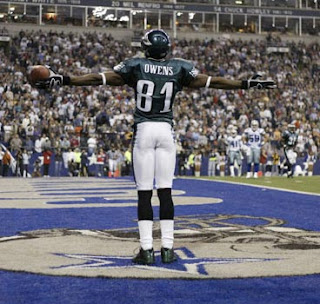 
The good news is that there is a player on the open market that can help the Chicago Bears.  He has averaged more than 1,100 receiving yards and 12 touchdowns per season over the last three years.  And in the biggest game of his career, he caught nine balls and racked up 122 receiving yards.

The bad news is that his name is Terrell Owens.

If this was a Madden NFL 10 trade being proposed to me, I'd accept it in a heartbeat.  On XBOX 360, I wouldn't have to deal with Owens' shenanigans.  But to his credit, he has kept himself out of the limelight despite struggling with Trent Edwards under center and Dick Jauron as his boss.  Owens is one of the most talented pass catchers in the league, and would be on his way to a Hall of Fame career had he not been a Hall of Fame home-wrecker in San Francisco, Philadelphia and Dallas.  Oh, then there was that stint in Baltimore.

When Owens was a free agent, I suggested the Bears take a look at Owens.  That was before they had Jay Cutler.

At 5-0, the Minnesota Vikings are not only the class of the NFC North, but could also make a case of being the class of the entire NFC.  They have the most explosive running back in the NFL.  Their defense is among the league's best.  And their quarterback whose name does not bear mentioning is one of the all-time greats at his position and is motivated as all hell to stick it to his former team.

Come to think of it, Minnesota could use an upgrade at wide receiver.  Despite you-know-who's presence in the pocket, Bernard Berrian doesn't have DBs shaking in their cleats.

Owens is a game changer.  A playmaker.  Someone opposing defenses game plan around.  In the off-season, Owens signed a one-year deal with Buffalo.  The Bills could be looking to send him off and get something for him while they can.

Do you see where I'm going with this?

The Bears could be looking to add a piece the team has never had before.  The last time the Bears had a receiver reach the 1,000-yard plateau, it was Marty Booker.  He did it in 2002.  Conversely, Owens has caught 439 passes accumulated 6,602 receiving yards and 67 touchdowns from 2003 to 2008.  As for Booker, he's currently out of the league.

And Owens would be motivated as ever.  He'd be looking to prove his critics wrong.  If successful, he would make Buffalo look like the inept franchise it is as it features an offense that is offensive to the eyes and a lame-duck head coach that makes lame ducks bow their necks in shame.

Did I mention Owens is on a one-year deal?  It's the kind of deal that has spurred Cedric Benson's hot start.  Could joining a contender down the stretch help spark Owens' career revival?

I think so.  Especially if all it is going to cost is a draft pick.