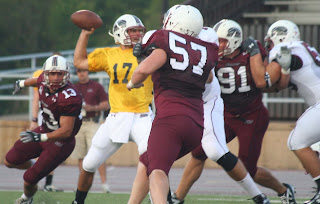 Paul McIntosh, your table is ready

I knew I had to write this post as soon as I received a text message early Sunday morning that claimed the Saluki football team's season dead on arrival upon hearing the news of Chris Dieker's injury, which was confirmed today..  As usual, yours truly has been asked to play the voice of reason.  Between the boo-hoo birds and the maroon kool-aid drinkers, here I am telling both parties to sit down, shut up and enjoy the rest of the show.  Because that's what you're going to get out of the rest of the Southern Illinois football season.

It's not as if the Salukis will be trotting out the collegiate equivalent of JaMarcus Russell every Saturday until the team hits Chattanooga.  Paul McIntosh is a damn good quarterback, and you'll see it soon enough.

McIntosh, a redshirt freshman, will make his first career start Saturday against the Indiana State Sycamores.  Here's what you need to know about McIntosh before we make the trip to Larry Bird's old stomping grounds.
Alright Saluki fans, let's get this straight.  He's a winner (evidenced by the state title and 15-0 record).  He's not turnover prone (22 TD passes, 5 INTs as a senior).  He's versatile and mobile (34 rushing TDs).  He was an elite high school signal caller (Indiana's Mr. Football).  Name is not Rex Grossman.

Those are all signs that SIU isn't as completely screwed as you might think it would be.  Dale Lennon is still roaming the sidelines.  Deji Karim is still on the team, as well as offensive weapons such as Bryce Morris, Joe Allaria, Marc Cheatham and Ryan Kernes.  The defense hasn't left Carbondale either as Brandin Jordan, Korey Lindsey and Marty Rodgers still are alive and well.

And as scary as it might sound for the rest of the Missouri Valley Football Conference, the Salukis might be better off with McIntosh under center.  He led the team with 81 rushing yards on Saturday, and his nimble feet will send defensive coordinators scrambling to defend what was once a non-factor of Southern's offense.

Remember when New England Patriots fans thought their season was over when Drew Bledsoe went down and all the Pats had to fall back on was a former 6th round pick named Tom Brady?  Well, we saw how well that has worked out for everyone.

I expect similar results out of McIntosh.