[Ed. Note: This is the newest installment of a series previewing the 2009-10 SIU men's basketball team.  After finishing the 2008-09 season with a disappointing 13-18 record, Chris Lowery's Salukis are one year stronger and one year smarter as they will look to extract revenge on the Missouri Valley Conference teams that took advantage of a young squad.  Those teams will get their comeuppance soon enough.  And what better way to warn them than with a preview of each player that will tear their hearts out and step on their souls.]

Justin Bocot exploded onto the Saluki hoops basketball scene when he scored a career-high 28 points in Southern Illinois' 72-64 win at Missouri State.  But really, his on-the-court success began with a homecoming of sorts as he scored a team-high 14 points in a 70-63 loss at Illinois State.

From that point on, Bocot averaged 10.8 points per game -- including the 28 point game that was in the team's second game after losing senior guard Bryan Mullins to what would eventually end up being a season-ending stress fracture.

So, what does Bocot do for an encore?  Replacing Ryan Hare, who was dismissed from the team on Sunday for violating team rules, in the starting line-up would be a good start. 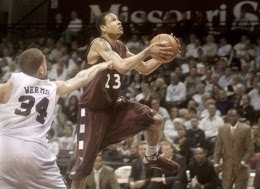 There might not be a more humble member of the SIU men's basketball team than junior guard Justin Bocot.  The 6-foot-4-inch guard from Bloomington, Ill., was a two-sport star in high school as he excelled on the hardwood and on the track.

A naturally gifted athlete, Bocot was recruited by high majors such as Big Ten schools Illinois, Iowa and Purdue.  However, Bocot did not qualify academically as a freshman (as detailed here by SIU sports information director Tom Weber) and that scared away many other powerhouse programs.  And rather than run away from Bocot as other schools did, the Salukis welcomed him as part of the family and Bocot paid his own way through what would have been his freshman year.

This sidebar story I wrote after his 28 point game reveals some details via head coach Chris Lowery, who comes off as a proud poppa when he discusses Bocot.

SPRINGFIELD, Mo. – Last season, Justin Bocot could not help the SIU men’s basketball team even if he wanted to.

The sophomore guard sat in the stands of the SIU Arena awaiting his turn as he was sidelined because of academic issues as his ACT score fell short of the NCAA’s eligibility requirement.

Head coach Chris Lowery said Bocot paid his dues off the court and is now paying dividends for the team on it.


“He was sweeping up in the locker room. He was working in the gym. I couldn’t have done that as an 18-year old kid,” Lowery said. “I couldn’t mop the weight room and the bathrooms and done all that stuff, no way I could have done that. But it’s all paying off for him.”


To this date, Bocot is still on the straight and narrow, and it is expected that Bocot will eventually be granted a fifth year of school and a fourth year of eligibility to play basketball for SIU.  It couldn't happen to a better player.

So, maybe my expectations are homer-ish because of a good story.  Or maybe they're realistic for the former Bloomington Pantagraph Player of the Year.  Bocot was an elite scorer at the high school level, averaging 20 points as a senior.  If you watch Bocot's game, you could tell he is more than just a scorer.  He averaged 3.2 assists and 2.3 steals per game. His lengthy wingspan allows him to pick off lazy entrance passes and defend all three guard spots.

It would have been nice to see Bocot be the first Dawg off Lowery's bench, seeing that he was named to the MVC's All-Bench Team for his role as a Saluki Sub.  But as the situation  goes, he is a high-energy player whose athletic gifts and basketball instincts will be used as a starter.  Bocot played very well down the stretch for a Saluki team that played without its senior leader and seemed to get stronger and better as the season progressed.

Even though I have delivered a glowing endorsement of Bocot's skills, there is still work to be done.  One of the knocks on Bocot's game are his jump passes -- a move that is highly frowned upon by Coach Lowery.  Turnovers play a major role in Saluki ball games, and if Bocot can limit his -- most of which come off the jump pass -- then Southern's backcourt should be in good shape.

His points per game should get a bump upon joining the starting line-up as he will likely average somewhere between 20 and 25 minutes per game as I'm sure Lowery will not want to over-extend any of guards -- an ideology shared with previous coaches Bruce Weber and Matt Painter.  It's a game plan that has helped fresh Saluki guards play their best all season long.  It's the game plan that helped SIU basketball become the premier mid-major in college basketball with its lengthy steak of consecutive NCAA Tournament appearances, Missouri Valley Conference titles and Sweet 16 appearances in 2002 and 2006.

And finally, my favorite Justin Bocot story, as originally posted here at the DE Sports Blog:

After covering a women's basketball game during the first semester, Bocot was having a personal post-game shootaround.  Dressed in a sweater, a collared shirt, khakis and some loafers, I asked Justin if I could take a couple shots with him.

I went on to airball my first few and Bocot cracked a smile and a slight laugh.

Eventually I made a few layups.  In between him drilling shots and my failed attempts at filling the basket I asked him if he ever got tired of being at the SIU Arena.  It was a Friday night.

Bocot's love for the game should translate well to the 2009-10 Saluki season.