[Ed. Note: This is the newest installment of a series previewing the 2009-10 SIU men's basketball team.  After finishing the 2008-09 season with a disappointing 13-18 record, Chris Lowery's Salukis are one year stronger and one year smarter as they will look to extract revenge on the Missouri Valley Conference teams that took advantage of a young squad.  Those teams will get their comeuppance soon enough.  And what better way to warn them than with a preview of each player that will tear their hearts out and step on their souls.]

Once upon a time, M.J. Hartwig and I debated about student-athlete blogs.  It stemmed from an issue with allowing athletes to write columns -- it was about the time Nick Hill was penning pieces for the DE as he prepared for the NFL Draft.  The conversation turned to who we would have do it next year.  I said no one.  He suggested Anthony Booker, who to this day is still the highest ranked recruit the modern era of Saluki basketball player has brought in.


"I'd give him whatever he wants," is what I remember Hartwig saying at the time.  Lots of time has passed between then and now.  (P.S. This is a much better blog than it used to be.)

So, here we are in 2009 and Booker has found his way into my projected starting line-up.  And for good reason. 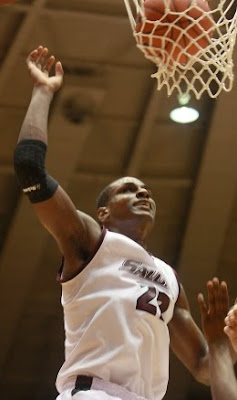 Sophomore forward Anthony Booker is arguably one of the biggest match-up problems in the Missouri Valley Conference.  Listed at 6-foot-8-inches, 230 pounds, Booker can bang down low with the big boys as his various post moves give many defenders fits.  In his high school career, and at times during his freshman year with the Salukis, Booker showed a nice touch with his mid-range game.

However, as he learned throughout the year, he fell in love with his long distance jump shot a little bit too much.  Booker only connected on one of his 11 3-point field goal attempt in the 2008-09 season.  It came in the waning moments of the Salukis' first-round loss to Bradley in the MVC Tournament.  With a full season of ups and downs under his belt, Booker should be poised for a break out season.

The highly touted forward struggled shooting from the field in the season's first 19 games as he shot 24 percent.  No power forward should be shooting 24 percent.  But Booker shook off the slow start to shoot 52 percent from the field down the stretch.  It seemed as if Booker grew as a player as the season went on, with a lot of his improvements coming in practice.  He outhustled a lot of bigs and some smalls for loose balls in the Salukis' no-holds-barred practices.  He was a grinder on the boards -- especially on the offensive end.  Defensively, he was always good for a few blocked shots.

Finally, it appeared as if it came all together on Feb. 18, 2009, when Booker scored a team-high 18 points on 8-of-15 shooting and grabbed 11 rebounds (6 offensive boards) in Southern Illinois' 78-72 loss at home to Indiana State.  It was the game SIU fans, coaches and team members had been looking forward to seeing Booker have.  He was the most dominant player on the floor as he accounted for 18 of the Salukis' 19 points off the bench while outscoring the Sycamores' bench by eight points all on his own.

Booker is capable of having an entire season like that.  That is why he's one of my five projected starters.  In the five games in which he played at least 20 minutes, Booker averaged 7.4 rebounds per game.  In Southern's 80-73 win against UMass, Booker grabbed 7 boards in 14 minutes.  Also, in those games in which he logged at least 20 minutes, Booker averaged 8.2 points per game

There is undeniable chemistry between Booker and point guard Kevin Dillard.  And I would argue that there is no more valuable relationship on the court than one between the post and the point.  Expect for Dillard to feed Booker on the low block often.  Then, expect the 6-8 forward to throw it down with authority or use his soft touch around the rim to put down two points.  It is the kind of inside-outside threat that could heat up a cold winter of basketball.

Booker reminds me of a more polished Randal Falker because both are good players around the rim on both sides of the floor.  However, Booker has a much higher upside, especially at this stage of the game as he enters his sophomore year.  Like Falker, Booker struggled at times at the free throw line.  If he can follow Falker's footsteps and improve his stroke at the charity stripe, do not be surprised if Booker is averaging double figures by the time March rolls around.