Bears to save money on "Cutler" jersey 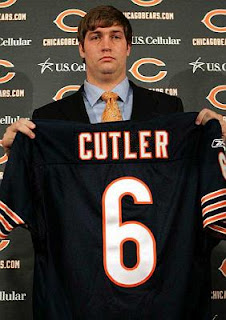 Sources tell The Big Dead Sidebar the Chicago Bears were able to acquire quarterback Jay Cutler because of a cost-cutting move.

Someone familiar with how the game of football is played in the United States of America's National Football League has informed TBDS the Bears will equip Cutler with former Bears kicker Kevin Butler's jersey for the upcoming seasons. The source said the Bears' equipment manager will unstitch the "B" and switch it with a "C" -- which will save the Bears a few dollars.

Meanwhile, the source who asked to remain anonymous because of their affiliation with the League of Extraordinary White Gentlemen said Bears marketing department could see a profit with the sales of Cutler replica jerseys after spending a few bucks on changing one letter on the jersey worn by the former Bears kicker.

On a serious note: Welcome to Chicago, Jay. I'll take my jersey double-XL!