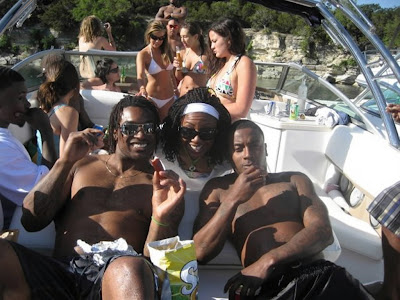 He has a lot of talent, a lot of money and a lot of pretty white girls on a boat that I would guess is pretty expensive.

Benson was one of the 2005 draft class busts.

But just one of them.

Let's discuss, shall we?

Cedric Benson (Round 1. Pick 4) Benson was the shit coming out of the University of Texas. He was supposed to be the next Ricky Williams, without the off field issues.

However, that was a lie.

But even if you put aside Benson's extra-curricular activities, he got on the wrong side of Chicago fans when he had his lengthy hold out.

I'm a big supporter of players (especially NFL RBs) getting as much money as possible, up front. But what's the difference $1 million can make when you're guaranteed at least $10 million.

Benson's bright spot was that he was an awesome second half runner, mostly because Thomas Jones ate up defenses in the first half.

Who the Bears should have picked: Adam Jones, CB, West Virginia.

Mark Bradley (Round 2. Pick 39) Bradley had tons of potential coming out of Oklahoma University.

That and $1.50 will buy you Sunday's Chicago Sun-Times.

Talent and potential is one thing, staying healthy long enough to use it is another.

Bradley was recently cut, which is the inspiration behind this post.

Thanks Mark. Oh, and the Sooners still suck!

Who the Bears should have picked: Roscoe Parrish, WR, Miami (Fl.)

Sure, he drinks heavily. And I like that. Unfortunately, he likes to throw the ball to he other team more than he likes throwing it to guys on his team.

And don't give me that Rex Grossman apologist shit. If Rex would have thrown it directly to Gaines Adams, he would have been sniped on spot.

Meanwhile, the Neckbeard gets a free pass because he's canoodling with Linday Lohan.

Who the Bears should have picked: Brandon Jacobs, RB, Southern Illinois

I go with Jacobs only because I saw him at SIU, it was my freshman year. He destroyed everyone. Whether it was running the ball, pass catching and even kick returns.

Marion Barber also would have been an outstanding pick.

There isn't much to say here.

I would have rather the Bears select Adrian McPhereson so I can write some clever check bouncing headlines.

Chris Harris (Round 6. Pick 181) The best player to come from this draft isn't even on the Bears anymore.

Kudos to the front office that let that happen.

Maybe the Bears should have gone with quarterback whose intitals are "DA" and went to from Oregon State University.

I'll be honest, the Bears' seventh round pick isn't even worth mentioning.

One day I'd like to see a team trade a seventh round pick for a day one pick because a team "needed" such-and-such in the seventh round.

That'd be great. Too bad the only guy who would fall for that got fired today.

Jerry Angelo, you have failed. Miserably. You're not a terrible guy and you're talent evaluation isn't the worse I've seen.

But you drafted Kyle Orton AHEAD of Marion Barber AND Brandon Jacobs.