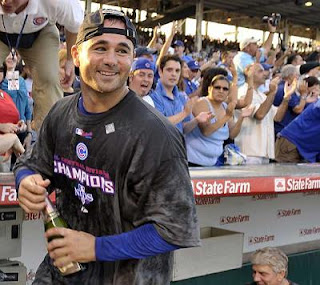 Of all the pictures I could have chosen, I went with one of Ted Lilly.

Because Lilly never smiles. Ever. That's why I gave him the nickname of TeddyNeverSmile.

And the last time we saw Lilly in the playoffs, he slammed his glove in frustration after Chris Young of the Arizona Diamondbacks hit a ball that still has not landed. It was a microcosm of the series in which the Cubs would be swept.

On with the analysis.

By virtue of their 5-4 victory against the St. Louis Cardinals, the Chicago Cubs have won the NL Central Division championship and have clinched consecutive playoff appearances for the first time since 1906-1908.

Ernie Banks couldn't do it. Neither could Ryne Sandberg, the greatest second baseman in baseball history. Sammy Sosa and his three 60 home run seasons couldn't get the job done either.

It's a feat three of the franchise's best players could never accomplish. That's saying something.

It was an ending that any great writer couldn't have penned better themselves.

Kerry Wood, the longest tenured Cub, was on the mound and former Cardinal great Jim Edmonds caught the final out, a lazy fly ball off the bat of Aaron Miles.

Edmonds' contributions are a kudos to general manager Jim Hendry, who should get some votes for whatever executive of the year award is given out at the end of the season.

He found gold in gravel.

18 homers from Edmonds, who I considered to be closer to a dead bird than a Redbird in recent seasons. Reed Johnson posting a .298/.352/.422 line as the Cubs' fourth outfielder.

And when CC Sabathia was sent to Milwaukee, in a move that was reminiscent of the Rick Sutcliffe move in 1984, Cubs fans were up in arms and looking to off Hendry like he was a French king.

Then, days later, he acquired Rich Harden, who has a 5-1 record and 85 strikeouts since joining the North Siders' rotation.

The term "home field advantage" meant something this year and the Cubs have rewarded the world's most loyal fans with the best home record in the league.

They were dominant from the start, and able to coast to a title with eight games remaining instead of having to come back from being eight games under .500.

Manager Lou Piniella's philosphy of patience has payed off with the second most walks in franchise history.

Hell, even free-swingers Alfonso Soriano and Aramis Ramirez have not only taken pitches, but they have taken four pitches to draw walks. It's an outstanding turnaround from the days of the "it's called hitting, not walking" train of thought.

They got offensive production from every position. Whether it was Mark DeRosa's career-best 20 home runs. Or Geovany Soto's Rookie of the Year performance behind the plate. Or "Little Babe Ruth" Mike Fontenot's pinch-hitting pop off the bench.

Yes, winning the NL Central was expected, but with eight games remaining? Not even the most optimistic of Cubs fans could have expected this.

But now it's time to look to October, of course not before clinching home field advantage throughout the NL playoffs. That will be step two of the process. Step three of course, is winning in October.

Something Edmonds did as a Cardinal. Derrek Lee did as a Marlin. And Piniella did as a player in New York and a manager in Cincinnati.

But it won't mean a thing without the ring. Ron Harper taught me that. Word.

But Cubs fans, heed the advice of "Jimmy Baseball," who addressed the team after popping the bubbly.

"It's nice to just bring everybody together all at one time and let them know what a special moment this is and tell them how our goal is to win the World Series and nothing else."

Didn't catch it? Then I'll close with it.

"Win the World Series and nothing else."