From the cutting room floor 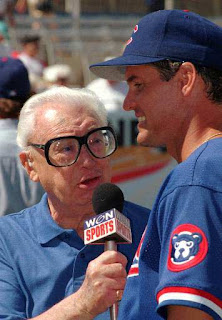 One of the things that makes the internet awesome is that there is endless space to create posts like this.

Unfortunately, because of the size of Thursday's Daily Egyptian, space was limited for the Cubs/Cardinals arguments that went into the paper.

So I present to you additional offerings, fresh from the cutting room floor.

Once the bane of Cubs fans' existence, the former Gold Glove center fielder has switched alliances and is doing his best to leade the North Side Nine to new heights.

Edmonds will undoubtedly go down as one of the greatest players to wear a St. Louis Cardinals uniform, but could ultimately go down in Cubs lore as one of Cubdom's greatest folk heroes if he keeps his act up.

His defense has been superb, and that was to be expected. But what he has done with his resurgent bat has kept him in the lineup.

"Jimmy Baseball" has hit 18 home runs since putting on the Cubbie blue pinstripes in May, providing the Cubs iwth the left-handed hitting power threat the Cubs desperately have been looking for.

Edmonds has also torched his formet mates with a two-homer game (resulting in a Cubs win) and has made several diving catches.

It's true Cards fans, you had him first. Most of our generation remembers Caray as the lovable Cubs announcer who sang "Take Me Out To the Ball Game" to the masses at Wrigley Field, but Caray got his start working with the Cardinals.

However, Caray didn't become a national icon until joining the Cubs.

caray might have gotten his start in St. Louis, but Chicago made him a superstar.

Not only is WRigley Field awesome because of its orginiality, the fact that it has spawned copy-cats throughout the league.

Houston's MInute Maid Park has the brick backstop and the hand-operated scoreboard and San Francisco's AT&T Park has the bullpens that are in the playing field.

It is a testament to how awesome the beauty on Clark & Addison truly is.

Cubs fans that reacted to Brian's story were rightfully upset that Mr. Feldt ignored Cub greats of the past.

It wasn't an oversight - Brian knows his baseball - so I'm going to defend my editor here.

But for every Musial, Gibson, Brock and Smith, the Cubs can answer with Billy Williams, Fergie Jenkins, Ernie Banks and Ryne Sandberg.

Not to mention Greg Maddux (twice).

And Mordecai "Three Finger" Brown, who had a Hall of Fame career despite having only three fingers on his pitching hand.

Writing stories like this put a smile on my face. Knowing that someone's gonna tweak out over what one of us says about our rivals gets my heart pumping.

That's why I've always wanted to be a part of this journalism thing.