Cards-Cubs rivalry about more than just the division 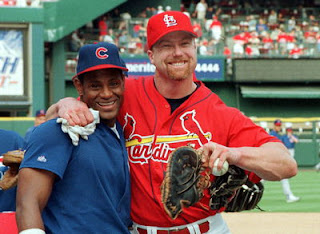 SalukiOrphan, one of the newest members of TBDS, provides another look of one of baseball's more storied rivalry.

Here's Cubs-Cards from atop the Redbirds' Perch.

As the days of September continue to wind down, the St. Louis Cardinals and Chicago Cubs will face off in their final series at Busch Stadium this season.

The Cubs enter the series limping, losing six of the seven September games, but lead the season series 5 games to 4.

Chicago currently holds a nine game edge over St. Louis in the division. Look, they're not going to win the division this year. It's over. They're in third place, five games behind the Brewers in the NL Wild card race and I'm just about ready to wave the white flag there, too.

Still, that doesn't mean the Cardinals don't have anything to play for as the series resumes under the Arch on Tuesday night. This rivalry carries more weight than just a division crown, in fact, this rivalry is on par with Yankees-Red Sox.

Winning the season series from the Cubs would salvage an otherwise disappointing season. Otherwise, Cubs fans will be able to rub it in that they won the division and they beat St. Louis in the season series, to boot.

When that happens, all Cardinals fans will be able to talk about is how the Cubs blew it in the playoffs again.