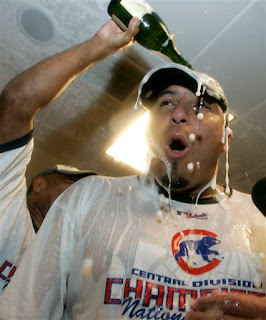 No flashy lead. No pretty girl. No witty remarks.

Chicago Cubs pitcher Carlos Zambrano pitched the franchise's first no-hitter since 1972 in his first start since being shut down because of recent rotator cuff soreness in the Cubs' 5-0 victory against the Houston Astros.

The game was played in Milwaukee's Miller Park in front of a largely pro-Cub crowd because of the effects of Hurricane Ike.

Zambrano struck out Darin Erstad for the 27th out on a pitch in the right-handed batters box. So unlike Milt Pappas' 1972 gem, Zambrano missed his spot but got the result he wanted in the end.

More importantly, the Cubs won the game, and moved their lead over the Milwaukee Brewers to 7.5 games because the Brew Crew was swept in their double header in Philadelphia.

That's like a double whammy for the Brewers, ain't it?

Not only did the Beermakers, who are fading like those 1980s acid jeans, their most fierce rival
played as the home team in their park and won a game in which their ace pitcher threw a no-hitter.

Cool by me. Just win in October, then I'll be really happy.

Until then, I'll just sit back, relax, enjoy a Miller Lite and smile.

It's about time the Cubs are doing something good. This is the closest they'll get to a World Series celebration for a loooonnnnggg while.