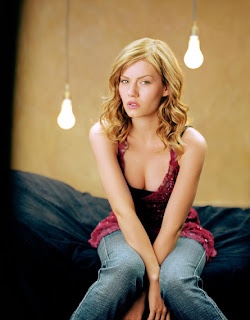 Have you ever seen the movie 'The Girl Next Door' starring today's eye candy, Elisha Cuthbert.

The problem is that she doesn't get naked - check that - that's not the problem because Cuthbert's beauty can stand on its own mertis. However, the movie continuously hints that she's going to get naked eventually.

Kinda like the 2008 Chicago White Sox. I'll get to them shortly.

Whoever wins today leaves with the AL Central lead. No matter how you cut it, that's how it's gonna go down today at the Hump Dome.

That's painful but it could be worse.

Did I mention it could be worse because here come the Mets. Don't worry though, they won't harm you.

The New York Mets' 9-6 loss (in 10 innings) to the Chicago Cubs was heart-wrenching in every sense of the word, especially if you're a fan of the Metros.

The Mets left more men in scoring position than the teaser at the end of the bar.

Yeah, I went there.

And the Cubs dodged bullets time after time and eventually won the game behind a bloop RBI double by Derrek Lee and a blast two-run home run by Aramis Ramirez.

Part III of the 25 Years Later Series. Two things will always be remembered about the 1983 SIU football team that won the Division I-AA national championship. Terry Taylor's block to preserve the 17-14 win against Eastern Illinois University and the Salukis' 28-6 loss to Wichita State in the final regular season game of the year.

The loss knocked them out of conference title contention, but it didn't matter. After giving up 28 points to the Shockers, SIU only allowed a total of 21 points to its next three opponents.

Check it out at siuDE.com.

Quality Linkage:
Enough editorializing for one night. I'll be back later with posts (hopefully).