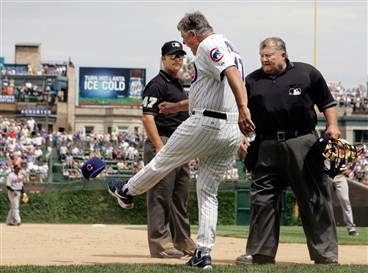 This is why the Chicago Cubs fans embraced Lou Piniella as their manager.

"We're playing like we're waiting to get beat," said Piniella, who had declined to do a postgame interview after Sunday's loss in Cincinnati. "You don't have a big enough lead in September to play ball like that. Teams play ball like that invariably get caught. … You have to stay aggressive, play like you've played all year."

Piniella's pissed, and I don't blame them. The Cubs are playing like crap. It's like 1969 all over again - minus that black cat business. The North Side Nine ran wild on the National League for most of the season and spent most of the year with at least the league's best record. It now looks like the Cubs' carriage is about to turn into a pumpkin.

More from Piniella? You know he's got more!

"You can talk about having fun, talk about relaxing," he said. "You have to get your damn shirt [sleeves] rolled up and kick somebody's [butt]. Period. Period."

And by "butt" he means ass! He wants someone to go kick some ass! What self-loathing Cubs fan doesn't want the Cubs to kick some ass?

I hope the team won't take it completely to heart because it'd be a shame for the Cubs to drop out of the NL Central race because they picked a fight against the Cardinals tonight, but the rest of the baseball world might.

Hell, if the Cubs complete the biggest collapse in the history of baseball, every sportswriters job just gets easier.

Here's something from my handy, dandy Sports Writing 102 notebook.

Chapter I: Billy Goats
Chapter Summary: Did you know the Cubs were cursed by a dude because the people at Wrigley Field kicked his goat out? It's why they've never made a World Series since. Exploit this at all times.

Chapter II: Black cats
Chapter Summary: Did you know in 1969, a black cat circled Ron Santo in New York and the Mets won the division and then the World Series? Don't mention that the Mets had a pitching staff that featured Nolan Ryan and Tom Seaver, that disproves your argument.

Chapter III: Bartman
Chapter Summary: Did you know that a Cubs fan Steve Bartman interfered with Moises Alou catching a ball in Game 6 of the 2003 NLCS and that cost the Cubs the pennant? Do not mention Dusty Baker being outmanaged by Jack McKeon who opened the season sitting on a park bench, not a managerial bench. Do not mention Alex Gonzalez's rare error or the fact that the Cubs held a lead in Game 7 only to blow that. Remember, it was all Bartman's fault.

For all you youngsters at home, remember: you're not reporting on the Cubs if none of these is mentioned.