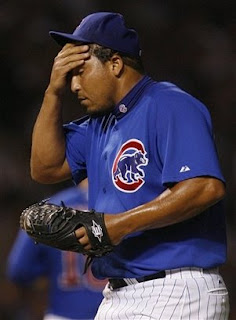 It's time to get my FJM on.

The Chicago Cubs are in first place and have the best record in the National League, yet a recent four-game losing streak has the media folks talking about a September swoon.

Man, it's a great time to be a lazy sports writer isn't it?

To be honest, I'm shocked that the sports blog The Big Lead (a personal fave) took the easy way out with its Cubs story, but hey, that "Sports Journalism 102: Cubs Reporting" class taught me three simple steps to covering the Cubs: mention curses, black cats and Bartman.

I can't wait 'til those stories follow. On to the doom and gloom.

The offense was throttled by minor league talent Brett Myers and octenegarian Jamie Moyer over the weekend, which was no big deal; getting blanked by Roy Oswalt Monday was understandable.

Since being recalled from the minors, Myers is 6-2 and pitching like the highly-regarded prospect he was made out to be. Moyer is one of those age-less wonders who has a 12-7 record including a 4-1 mark in the second half. And there's no shame in being blanked by Oswalt (50-13 career record in August, September and October.)

So what's with the gloom and doom? Oh yeah, there was last night.

Losing again Tuesday, this time in the 11th inning on a two-run homer by Geoff Blum off closer Kerry Wood, plus the sudden injuries to Cubs’ two best pitchers surely moved the meter to DEFCON 3 for those lovable Northside losers.

Bravo! You found the buried lead: Big Z's bum arm. Congrats. I'm still looking for that second injured pitcher unless someone got at Bobby Howry after last night's debacle. If you're talking about Rich Harden, read closely in that same story you linked.

"Rich Harden's next start won't be until next week when the Cubs travel to St. Louis, an extended break that general manager Jim Hendry said was planned for when they acquired the right-handed pitcher."

No new injury news for Richie-rich. Remember kids, reading is a skill.

Worth noting: After what should be a painless trip to Cincy this weekend, there are six more vs. the Cards, six more vs. the Brewers (who remain 4.5 back in the Central), and four more vs. the Mets. Those teams have three of the four best records in the NL.

I guess it's easy to dismiss the fact that the Cubs have the best record in the NL, which lessens the value of that whole "three of the four best records" thing.

As for future Cub opponents:

After the "painless" trip against the Redlegs, the Cubs face the Cards, who have taken four of the last six against the Redbirds. Then a series against the Brew Crew, who the Cubs swept in Milwaukee at the end of July to turn a one game lead into a five game lead.

I don't even care about the Mets, but for argument's sake, the Cubs took two from the Metros earlier in the season.

As for you media types who get wet writing stories of the Cubs impending collapse, a little bit of research might help you think twice about putting pen to paper for those stories.

You know where I found most of those stats? Here. That's right. All it took was four letters, a dot com and a couple mouse clicks to find pertinent information about a team. And heck, there were no mentions of ghouls, goblins or goats.

Try harder next time, TBL. I'm sure you'll be back in my good graces.

In response to: The Cubs Septermber Swoon Begins (The Big Lead)