Is it time for a Booty call in Minnesota? 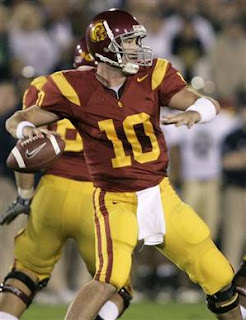 The Minnesota Vikings are 0-2 with arguably the most exciting running back not named LT running around, through and past defenders.

Yet the passing game isn't passing at all. In fact it's failing.

So whenever a relationship gets rocky, isn't a Booty call in order?

That's what Vikings fans have to be thinking: John David Booty is the answer.

The former University of Southern California star is waiting in the wings for head coach Brad Childress to topple the Tavaris Jackson regime and insert the former Trojan.

Booty can't do worse than Jackson, who is single handedly ruining the Vikings playoff chances every time he drops back to pass. And that's the killer thing right there.

The fact that the AP Express continues to roll even though everybody in the United States of America knows that No. 28 is going to get the ball is astonishing.

And don't even throw out the idea of Gus Frerotte starting for the Vikes. I'm sure Minnesota football fans would rather see a triumverate of furry ferrets taking snaps than Gus the Bust.

So it's time to give Booty a chance.

It's not like he was terrible at USC. He was a Heismen Trophy candidate before getting hurt. His 518 career completitions and 6,125 passing yards rank fifth in school history. Did I mention he went to USC - which has produced quality college arms such as Carson Palmer and Matt Leinart.

I guess you can start penciling New England Patriots back-up Matt Cassel and current USC starter Mark Sanchez for future reference too, while you're at it.

The point is, at 0-2, the Vikings chances of making the playoffs are slim - and that's only because their quarterback is anemic at best.

There's no time like the present to start experimenting ... or hitting the free agent market.