Why the Dodgers will beat the Cubs 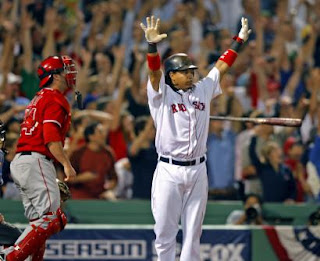 One of our two resident St. Louis Cardinals fans, "Big Stilley" has hopped on the L.A. Dodgers' ship.

Let him explain as Manny Ramirez continues to celebrate his walk-off shot from the 2007 ALDS.

I have been predicting for the last three weeks the Dodgers would win the World Series, so don't take this as a Cubs bashing. This is simply why I think the Dodgers will get past Chicago.
The biggest reason is Manny Ramirez. He has been the most dominating player in baseball since coming to L.A. and everyone knows Manny is an even bigger beast in the post season.

Ignore the AL/NL splits (which make no sense anyway) and Man-Ram has 37 homers and 121 RBIs.

That's sick.
I think Manny is one of the few players who has the ability to nearly carry his team to the World Series. He is one of the best hitters in baseball.
The Dodgers will need more than just Manny to win it all though. They're going to have to have some other players step up and play well.
Derek Lowe has shown in the past that he is a great post season pitcher. The way he pitched in 2004 when Boston won the World Series shows that he can dominate in October. Remember, he clinched every game for the BoSox that magical season.
I think Lowe will take Game 1 over Ryan Dempster. Dempster has been good at home for the Cubs this season, but he doesn't have near the post season experience of Lowe.
Carlos Zambrano has been on a roll this season. I don't think anybody is going to hit him, so the Dodgers might as well tack this one up as a loss.
Game 3 will likely be a match up of Rich Harden of the Cubs against Hiroki Kuroda. Kuroda dominated the Cubs, pitching a four hit shutout in June. I see the Dodgers taking this one.
In order to avoid Big Z in game 5, the Dodgers will throw out Derek Lowe on short rest for game 4. The Cubs will likely throw Ted Lilly, but could possibly go with Dempster on short rest. I think this will be one of the higher scoring games, but the Dodgers will win and take the series in 4.
My surprise player for the Dodgers: Nomar Garciaparra. I see him stepping up and playing really well for L.A. He's going to end up being the difference maker for this team.
The last reason I think L.A. will win is my gut. I have always been a firm believer in trusting your gut instinct and for the last three weeks that instinct has told me the Dodgers will win the World Series.
Now a few reasons for why the Cubs won't beat the Dodgers.
I don't think you're going to see the same Jim Edmonds you saw during the regular season for Chicago. I think he's going to struggle.
Ditto for Aramis Ramirez. He has hit .196 in 56 career post season at-bats. He's going to keep that streak up and the Cubs will fall.
The Dodgers may not be the more talented team, but I do think they will beat the Chicago Cubs in the NLDS.