Why I Hate Your Playoff Baseball Team

Confession: I am a baseball nerd.  Really.  When I was younger, I found myself watching playoff baseball despite the fact that my favorite team had been eliminated from playoff contention for a good chunk of those years.

But now, after back-to-back soul crushing playoff sweeps, my favorite team failed to make the postseason altogether.  I thought about latching myself to the bandwagon of one of the remaining teams.  Upon further review, I couldn't find it within me to do it.

And this is how "Why I Hate Your Playoff Baseball Team" got started.

The longest (and arguably most offensive to those of you who take your favorite team way too seriously) post in TBDS history after the jump.

Everyone hates the Yankees because they are what their favorite team is not.  Honestly, if your favorite team's owner/management group went balls out to put a winner on the field, how would you feel?  Whether it be through the minor league system or buying the open market's best player, if the Cubs did that, I would be happier than Derek Jeter on ladies night.

Speaking of which, screw you Jeter.  My one hope in life is to date one girl that is out of my league.  However, I can't because they're all swooning over you. His dating resume includes Jessica Biel, Minka Kelly, Mariah Carey and others.  Then there was this experiment with a college girl.  I have enough trouble dating girls my own age, Jeets, there's no reason to be dipping into my pool.

The One Thing I Like:  With all that said, I'd kill to be Jeter's wing man.  His sloppy seconds and rejects are 10s.  I'm down with OPP. 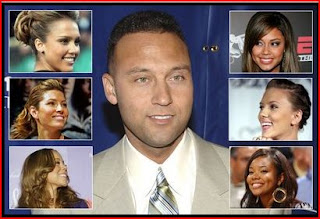 When I was younger, I used to like the Red Sox.  They were my "other" team.  My godfather played for the BoSox from 1989 'til 1993.  He always hooked me up with tickets and it was flippin' sweet.  I got autographed balls from Mike Greenwell, Mo Vaughn, Roger Clemens, Eric Wedge -- all those guys.  Heck, I got to meet Wedge and others one time when he was Cleveland's first base coach.

Those memories are gone, replaced with this story.

I went to a Cubs-Red Sox game in 2005 at Wrigley Field and hit it off with an attractive young lady.  A baseball fan with a passion for the game and the willingness to buy a then underaged Cubs fan a beer or two.  Then I told a funny joke.  A rarity still in this day and age ... she laughed ... and sounded like Peter Griffin.

We went our separate ways.  I wanted no part of that.  She's ruined Boston fans until I go to Boston and need a place to shack up.  I guess I could always hang out with Tom Brady. 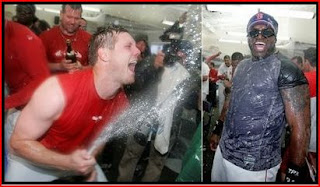 I'd be a terrible person if I wrote bad things about the Angels after the tragedy that struck them this year.  So I'll be kind.  Sorta.

I hate that you have baseball's best manager, Mike Scioscia.  He's awesome.  I hate that you reload, rather than rebuild.  I hate that you beat Dusty Baker in the World Series in 2002.  The loss cemented the end of Dusty's stay in San Francisco and began his run in Chicago, where he would go on to ruin the perfectly good arms of Mark Prior and Kerry Wood.  His effect has also touched the careers of Matt Clement and has started to do so for Carlos Zambrano as well.

The One Thing I Like: Vlad.  VladGuerrero's style at the plate encapsulates my collegiate dating career.  Swing hard and hope you make contact.  However, Vlad's been a little more successful with his style.

Then there was this...

I was ready to write this about the Tigers, but I've got my fair share of beef with the Twinkies.

First of all, thanks for Andy MacPhail you asshole pricks.  Thanks a f****** lot.  Never have I met such an egomaniacal baseball jerkwad.  Never.  That includes every Philly, Yankee, Red Sox, Cardinal, Bradley Braves fan I've ever met and despised.  A member of the lucky sperm club, MacFail was the sonofabitch whose 5 year plan didn't hatch a playoff team until 1998, and a division champion until 2003.

The One Thing I Like: Oh yeah, and Favre can go to hell too.  Oh, this is where I say something nice.  Joe Mauer is a bad ass.  So is Joe Nathan.  If Mauer doesn't win AL MVP, someone should piss in the cereal of the baseball writers who voted for someone else.

Philadelphia is looking to win its second straight World Series.  It won't.  Brad Lidge sucks and if he gets into the game, every other pitch he throws is going to end up putting another crater on the moon.  If the Phils somehow meet the Cardinals in the NLCS, they might have to put Lidge in the witness protection program.

Overall Philly isn't that terrible.  It's the place that helped raise The Fresh Prince, DJ Jazzy Jeff and Kobe Bryant.  On the other hand, it's the same town that throws batteries at Santa Claus when they don't get what they want for Christmas.

And you thought Jay Cutler was a whiny bitch.

The One Thing I Like:  Ryan Howard.  I drafted Howard in my fantasy league and traded him at the All-Star break for Alex Rodriguez.  In the second half, A-Rod hit .310/.394/.518/.912 with 13 homers, 50 RBIs and 11 steals en route to a fantasy title.  Howard performed well, but my third baseman prior to that trade was Mark Teahen. 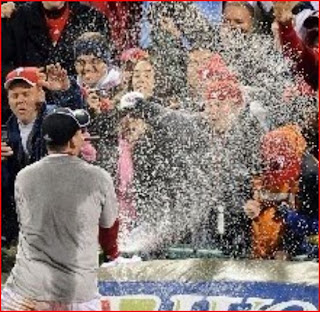 As a Cubs fan, I'd like to thank the Rockies for Don Baylor.  Not.  Don Baylor sucked.  He was a terrible manager who promised free agent hitters would come in droves to Chicago.  And the best we got was Moises Alou, who absolutely tanked in his only year under Baylor.

Then there's the Jason Marquis factor.  Did you know every team Marquis has pitched for has made the playoffs.  He's Dave Kaplan and Steve Stone's golden boy, despite the fact that neither of them were crying a river of Cubbie blue tears when he was shipped out west.

In total, Colorado sucks for many other reasons.  It's cold.  Who wants to play baseball in the snow?  No one with a brain.  Your big tourist attraction is skiing in mountains.  The only thing that would be as dangerous would be if Florida tried to sell vacation plans in which tourists would hang out in the swamps with gators not named Tim Tebow.

The One Thing I Like:  Thanks for Jeff Baker, pricks.

The Dodgers are lucky to even have a baseball team.  Their fans are a joke.  They come early and leave early.  They have a rich history, most of which revolves around the team's Brooklyn roots.  Oh, and the entire NL West can screw itself.  Two transplanted New York teams, two expansion teams and a team that had to build its ballpark so it wouldn't get crushed by one player that retired three years after the damn thing opened.

Back to the Dodgers.  They're blessed with one of baseball's best minor league systems, hence the team's young and talented roster.  They also have Alyssa Milano who is absolutely smoking hot.  And she's only a fan because her daddy was a Brooklyn Dodgers fan.  I would give up five Wrigley Field bleacher babes for one night with Alyssa Milano.  And that is after taking into consideration she's been in more major league clubhouses than Milton Bradley.

Also, it was the Dodgers' sweep of the Cubs that sent me into a heavy drinking binge last October.  Like, heavy.  I mean, cashing a bottle of Jack Daniels and a case of Miller Lite and waking up wishing I hadn't, kind of binge.

What can I say about the Cardinals that hasn't already been said about herpes, chlamydia or genital warts?  I would rather see eight more years of George W. Bush running this country than see one more St. Louis championship.

Mark DeRosa will make his third straight playoff appearance and is bound to break the hearts of Cardinals fans just as he did Cub fans, right?  He was the man who turned a 3-1 count with the bases loaded against Livan Hernandez into an inning-ending, rally-ending double play.  He was the man who couldn't handle what should have been an inning ending double play ball against the Dodgers last year as L.A. completed the sweep.

Yet, women love him ... why?  Because of his stubble.  F*** his stubble.  If that's all they loved, I would have been knee deep in 20something college co-eds since I was 12.  Go choke, DeRosa.  History tells me you will.

One Thing I Like: I know a pretty girl that happens to be a Cardinals fan.  A.  Pretty.  Girl.

At least I'll always have this to keep me warm at night.