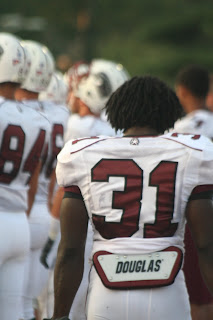 Richard White has tallied 53 yards on 11 carries in the 2009 season.  He didn't even suit up for the Salukis' 30-10 win Saturday at Western Illinois.

But for the second straight season, there is a case for naming White the Salukis' most valuable member.

Last season, White was injured on a kick-off return in SIU's 37-31 season-opening win against the Hampton Pirates.  His injury opened the door for Larry Warner.  And to say Larry Lightning ran through it would be an understatement.  Warner went on to rush for what was then a career-high 151 yards and score two touchdowns -- including a 95-yard kick-off return in the win against Hampton.

And even when White returned, Warner became Dale Lennon's featured back.  Warner gained 1,265 yards on the ground to go along with 10 rushing TDs and three kick return touchdowns.  With White sidelined, Warner became a cult hero for the Dawg Pound as he was the team's leader and focal point throughout the 2008 season.

Fast forward to 2009 and White has found himself in street clothes once again.  This time it is Karim busting through the door en route to a stellar season with the Salukis. Through four games, in which SIU is 3-1, Karim has taken full advantage of the increased PT, notching 561 yards and five touchdown runs.  He opened Saturday's win at WIU with a 92-yard run on the team's first offensive play from scrimmage.  He went on to pick up 157 yards, averaging 9.7 yards per rush.

Like Warner, Karim has also shined in the special teams department.  Deji has averaged 42.6 yards per kickoff return -- including an 69-yard scamper that nearly went all the way on Saturday.

A rare back that combines power and speed, Karim is making good on a new lease on life at Southern.  While Warner shined in White's place, Karim also found himself on the sideline nursing a season-long injury sustained in spring ball.  It would be an injury that sidelined a player that scored eight rushing touchdowns the year before.  It would have been easy for Karim to risk his status and take off the redshirt.  But Lennon and the training staff was somehow able to convince Karim to tough it out and wait 'til next year.

And now that next year is here, Karim is living the dream as he is on pace for a 1,234-yard, 11 touchdown season.

It's too bad that for the second straight season, it is coming at White's expense.