Southeast Surprise: The best division in the East 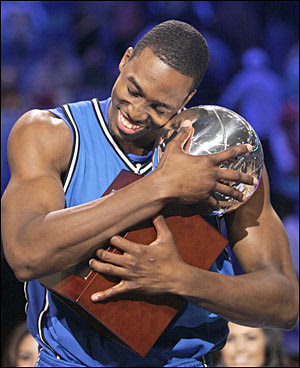 For the past few seasons, the Central Division has been the standard for the Eastern Conference. It hasn't always produced the best team, but Detroit, Cleveland, Chicago and at times Indiana and Milwaukee have been tough, competitive teams.
The tide turned last season after Detroit had its worse season in some time and the Atlanta Hawks took another step forward. After the Orlando Magic claimed the Eastern Conference crown, it's safe to say it is the best division in the conference. Three teams should be locks for the playoffs and the other two could be good enough to make it as well.
Here is how it should play out.
1. Orlando Magic
The conference champions are back to defend their crown. Some say the addition of Vince Carter makes them an even better squad, but it's going to be tough to repeat. Hedo Turkoglu was a clutch player for the squad last season and Courtney Lee played lock-down defense. Dwight Howard will need to improve his free-throw shooting, Carter will need to commit to defense and Mickael Pietrus will need to build off his stellar season.
The most silent but violent move for the Magic: Brandon Bass. His motor never stops and he will help Howard clean the glass.
2. Atlanta Hawks
I absolutely love this team and truly believe they are a threat to not just win this division, but the conference as well. Joe Johnson is one of the best shooters in the NBA and is a great leader. Mike Bibby is still an effective point guard and now has Jamal Crawford and Jeff Teague (who had a tremendous preseason) backing him up. Josh Smith is a great off-the-ball defender while Marvin Williams has tremendous on-the-ball defense. Horford is a cardio machine for a center.
The Hawks improved the bench, which was their main concern, but there is still no front court depth. In a conference with Howard and Shaq, Atlanta will need to add size to make a push for a conference championship.
3. Miami Heat
I felt this team slightly overachieved last season, which makes it even more dangerous this year. Dwayne Wade is in a contract year, Mario Chalmers is a legitimate NBA point guard (especially on defense), Michael Beasley should be better and Jermaine O' Neal might be healthy. Biggest issue for this team is lack of scorers.
The addition of Quentin Richardson should help spark the offense, but expect Daequan Cook to be the breakout star for the Heat.
4. Washington Wizards
Gilbert Arenas, Mike Miller, Caron Butler and Antawn Jamison. Sounds like a dangerous lineup. Brendan Haywood, DeShawn Stevenson, Randy Foye, Andray Blatche and JaVale McGee sounds like a dangerous second wave. So why will they finish fourth in the division? Someone is bound to get injured first off and secondly, where is the defense going to come from?
This is the only team in this division where I look around and can't see a single sound defender on the team. Butler and Jamison are respectable, but not great. Everyone else is close to water. They will win plenty of games by outscoring teams, but defense wins championships.
5. Charlotte Bobcats
This team was scary the last three weeks of the 2008-09 season. The intensity they played with allowed them to slay the giants of the NBA and the look in Gerald Wallace's eyes every time he stepped on the court was reminiscent of Mike Singletary. This team will turn the corner one year, just not now.
Wallace is great and I love the combination of Raymond Felton and D.J. Augustine. Their defense got a whole lot better with Raja Bell and Tyson Chandler. But there is one huge problem: To win in the NBA you need a star, they don't have one. This team brings it every night, but until they get their franchise player, they will struggle.