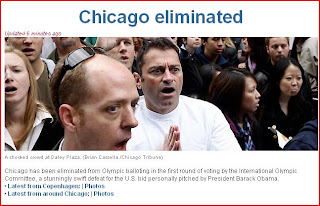 
In my eyes, the "presentation" must have looked like something straight out of a Second City improv.

Host: "OK, let's do some improv.  Shout out your suggestions, as usual.  Someone give me a baseball team."


Portrayed on the stage is a group of "Cubs" being battered, bullied and pushed off the plank.

In the end, Chicago being eliminated first comes to a shock to some people pulling for the Windy City.  As a life-long Cubs fan, I say "meh."  I've been there before.