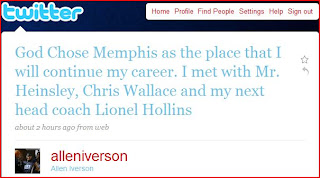 All-Star guard Allen Iverson measures in a 6-feet tall and weighs in at 165 pounds.  No wonder God chose Memphis as the next destination for the 1996 No. 1 overall pick.
Known for its delicious barbecue, blues music, busted windows and scandalous college hoops squads, Memphis, Tenn., seems like the imperfect place for A.I. to wrap up what has been at times a successful, but mostly, star-crossed career.  Iverson will join Zach Randolph, O.J. Mayo and Rudy Gay as the Grizzlies must be looking to field a team that seems to be allergic to passing the rock.
But in Iverson's eyes, this group of misfits is building to be a contender.
At what point do you start feeling bad for the team's actual point guard, Mike Conley, Jr.  He's got as much of a chance to develop into a young star guard under Iverson's tutelage as a young pitching arm does surviving the rigorous reign of Dusty Baker. 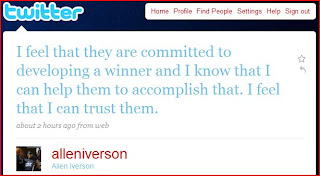 Failed stops in Denver and Detroit have marred Iverson's career, but choosing Memphis is a head scratcher.  With the 25 shots he'll be chucking nightly, he will easily stunt the growth of Conley Jr., Mayo and Gay.  Between he and Randolph -- who at 6-9 260 will throw up more threes than any 6-9 260 guy ever should -- I'm not even sure when the team's best players will ever touch the ball.

It's only a one-year deal, and while it is possible that management could turn Iverson into a valuable piece at the trade deadline, it is unlikely.

The biggest loser in this whole ordeal has got to be the basketball fans in Memphis, who saw their only pro team walk out the door and head to Lexington, Ky.