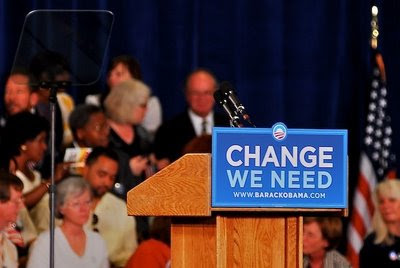 Even Barack Obama thinks the Cubs need change in the closer's role.
The text message was simple: Kevin Gregg blows another save. But it could have ended with an even simpler message.

Gregg blew back-to-back saves in the Cubs' three-game set against the Florida Marlins. He picked up the win after blowing Saturday's game thanks to Derrek Lee's 10th inning homer, but was not as lucky in the series finale on Sunday.

After constant prodding by Breakfast For The Block big-foot Luke McCormick, I was ready to accept Gregg as the closer for the rest of the year, as he had converted his last 10 saves prior to Saturday's debacle. After Sunday, the love fest ends. If Lou Piniella wants to guide the Cubs to a third straight NL Central title, he needs to make a move in the closer's role.

In 14 July appearances, Gregg lowered his earned run average from 3.82 to 3.35. In two August appearances, that ERA has skyrocketed to 4.17 after giving up five runs on six hits, three of which were extra-base hits.

He leads all of major league relievers in home runs allowed (10). Of the 19 closers in baseball that have at least 20 saves, Gregg's WHIP (1.35) ranks third highest behind Matt Capps and Brad Lidge, each of whom have 1.79. His 4.17 ERA ranks fifth highest, as once again, Brad Lidge (7.11) leads the way.

It might not get better as this month progresses. Gregg owns a career ERA of 4.91, and last year, Gregg posted a 4.94 ERA after the All-Star Break.

Jake Fox, whose ninth inning homer should have been the game-winner if the Cubs had a competent closer, said he feels bad for Gregg, who he said has some "great stuff." Nick Swisher has some great stuff too, but I don't feel bad for him. Not in the least.

"I've seen Gregg over the last few years and he's been as dominant as anybody."

Saying that Kevin Gregg has been as dominant as any closer in baseball is an insult to my intelligence. And anyone who nods in agreement with Uggla should be banished from baseball and forced to give sponge baths Bartolo Colon, CC Sabathia and Prince Fielder for the rest of their lives.

Nothing says "dominant" like a low-90s fastball with no movement and a slider that screams "hit me" as soon as it's released.

Then there's Piniella, who when asked if he should make a change in the closer's role, he responded, "Why should I?"

Why is a shake-up needed in the closer's spot? To put it in the most simplistic terms: He sucks. Lou, youv'e played musical chairs with your line-ups a billion times and it is finally paying off.

Change is necessary, and has proved to be good for Piniella's Cubs in the past. I don't understand why cool off his own hot hand when it comes to making a change in the most important role in the bullpen.

Carlos Marmol can't close right now, nor should he. Marmol has hit a NL-most 10 batters and has issued more free passes through 55 games (48) than he did last year in 82 games (41).

Angel Guzman has been the Cubs' best reliever, but lacks the experience. But let's be honest with each other, how much has Kevin Gregg's past experience as a closer helped the team?

Searching for an answer?

Couldnt have stated it any better. I think honestly tho, we need to give Guzman a shot. Who was Carlos Marmol, besides my look-a-like according to many peoplpe, before he proved his stuff. Granted he needs to learn not to fall off the base and he would be a great pitcher. Either way I think give Guzman the go and see how he does. Only way to learn is through experience.

Don't forget ... Hendry could have signed Trevor Hoffman but instead signed this idiot.