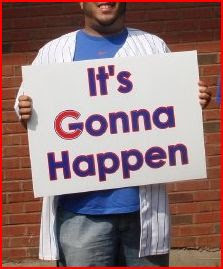 Kevin Gregg, my bad. Most of the season, you've been among the most frustrating player I've ever witnessed as a Cubs fan. You wear goofy goggles and your throwing motion has been compared to one of a batting practice pitcher.

But even I, your biggest detractor, can't help but give you a tip of the cap for what you have done.

Not bad for a guy that nobody wanted.

He'll never be confused for Mariano Rivera, but if he continues to get three outs without blowing the lead in the ninth, the Cubs all of a sudden have one of the NL's best bullpens with Carlos Marmol and Angel Guzman turning nine-inning games into six-inning games.

Then there's Milton Bradley. The only person taking more grief than me for supporting Crazy Uncle Milton is Milton himself. It's hard enough when opposing fans are riding you hard, but Bradley's in a no-win situation with Chicago fans. But slowly and surely, he's starting to get work done.

Over the last month, his batting average has been a pedestrian .258, but his on-base percentage has been an outstanding .417 . He's drawn 18 walks in 19 July games to bump that OBP all the way up to a team-best .382. Two of the walks he drew today came into score, one of which came as he scored from first on Alfonso Soriano's double to left due in part to an excellent slide.

He might not be scorching the baseball, but if Bradley (who's hitting .307 in home games) can get on base at a 40-percent clip in front of Soriano in the six spot.

Speaking of Alfonso Soriano, it looks as if he really has taken a liking to being a middle-of-the-line-up thumper.

The former lead-off man came into today's action batting .392 in the six-hole and that will get a nice boost after a 2-for-4 day at the plate today. He's slugging .692 out of his new home in the order and if he keeps it up, he will clearly surpass the .560 slugging percentage he posted in his last year as a Washington National and first year as a Chicago Cub.

Despite having each of their top three starters see DL time this year, missing its biggest offensive threat player for a majority of the year, the whining and crying of Mark DeRosa fanboys and jersey chasers ... the Chicago Cubs find themselves in first place.

Here's hoping it can stay that way.

I have no idea how we've managed to do it. But we need to find a way to stay here.