TBDS Late Night: The One About The Now Infamous Erin Andrews & The ESPYs 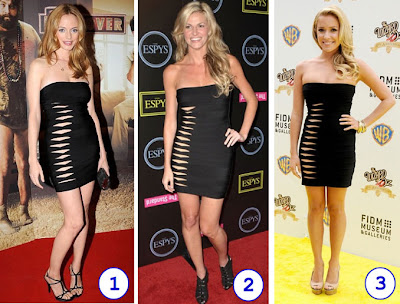 I have never watched a minute of the ESPYs. Ever. I've never felt the need to go and watch the shameless self-promotion that is ESPN get off on "awarding" those who they give 24/7 coverage of. Maybe I don't care because my favorite teams and players likely did not get an honor, nor should they.

You don't play the game to win ESPYs. If you do, then get the eff off my team. You're wasting my time and wasting ownership's money. You play to win the game. And if you win enough games you win championships and with championships come money, fame, riches and (apparently) crazy bitches. (See: McNair, Gatti & The Summer of Celebrity Death)

ESPN displayed some of its biggest winners during its morning SportsCenter, but I was too hungover busy in the morning to care. However, I do care about the dress of Ms. Erin Andrews. Mostly because it looked like a tiger ripped through it before Ms. Andrews said, "Silly kitty, that's enough" as it walked away sulking with its tail between its legs. Kind of like most 20something college kids after their 30 second encounter with The Sideline Princess.

If it lasts that long.

With Leather asked who wore the dress the best. I ask, who's taking it off first at the end of the night. Maybe I'm wrong, but if I'm wrong, then I just want to be in love with a pretty girl. That's all. And nothing should be wrong with that.