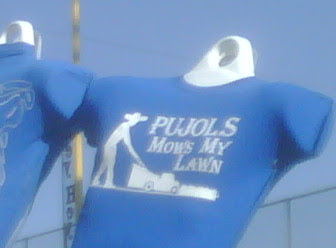 And while you're at it, trim the bushes!

Announcement: TBDS Late Night will now be a full-time fixture on this blog Monday through Friday and select weekends. That lengthy intro will no longer apply. Which means more room for items like the following.

And here's hoping the Chicago Cubs got that whole losing thing out of their system because they enter a big four game series against arch-rival (pun intended?) St. Louis Cardinals, who happen to be in first place in the NL Central. After a weekend of smacking around their neighbors from the north (Milwaukee for those of you who are geographically challenged) three out of four games, the Cubs offense was grounded in its two losses against the Atlanta Braves.

And that's with savior Aramis Ramirez back in the fold. Yesterday, I suggested a whole slew of changes. But since we all know Creighton people can't read, this blog probably went heard upon deaf ears. Or in the case of this site, blind eyes.

So that brings me to this. Rich Harden, it's time for you to get your shit together. Now.

There isn't a better time to revert to the pitcher that made you the must-have pitcher after CC Sabathia went to Milwaukee from Cleveland and proceded to drop the periods in his name en route to leading the Brewers to the NL's Wild Card berth.

Dick Hardon could get back in my good graces with a quality start Friday as three members of Team TBDS will be in attendance. Including the Cardinal-loving SalukiOrphan.