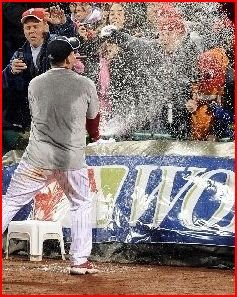 Only in Philly. I guess this is where Kobe got his "thing" from.
Once upon a time, I used to write preview stories for big games and big series for this blog. As my free time has dwindled, so have the previews. But this is special, so consider this one big aside.

Instead, I will give into the primal instinct of being a fan and admit that I want the Cubs to beat the Phillies because I want to shut a certain Phillies fan up. He knows who he is. He'll read this. He might even respond.

See, if there is one fanbase that deserves absolutely nothing it is Philadelphia. Philly's most recent blessings:
That is way too much to give a fandom that has heckled, booed and pelted Santa Claus with batteries. Philly fans deserve this much good happening to them as much as Paris Hilton deserves a cure for whatever diseases live inside her mouth and other dark places. Giving the Phillies a championship is like giving that one bratty kid who ruins every holiday party a gift for not completely ruining this year's festivity.

And yet, I shouldn't be bothered by this because Philadelphia has wet dreams about being half the city Chicago is.

Better food? Chicago, by far. Better hot dogs. Better sandwiches and better pizza. Seriously, that Domino's American Legends pizza is a joke. No Chicago style? No New York style? That's like putting together a list of best rappers alive and leaving off Kanye West and Jay-Z, but putting the Young Gunz on the list. (Someone I know who reads this will get that reference.)

Better sports town? Chicago, without a doubt. The Bears, Bulls, Hawks and (dare I say?) White Sox provide a much more entertaining sporting experience than the Eagles, Sixers and Flyers.

The best thing Philadelphia has going for it is A.J. Daulerio. Other than that, the last really good thing to come out of Philly is some guys named Ryne Sandberg and Ferguson Jenkins. (And to a lesser extent, The Fresh Prince and Jazzy Jeff.)

By the way, thanks for that, fellas.. Hope you enjoyed the Hall of Fame careers of Ivan DeJesus, Larry Jackson and Bob Buhl.

Oh and one more thing about your city that stinks. You have to live there.