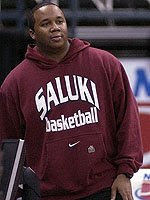 The message boards are ablaze with "Fire Chris Lowery" posts left and right and it just blows my mind.

Look, I was disappointed with the SIU Salukis last season after failing to qualify for the NCAA Tournament despite a lofty preseason ranking.

Of course I'm even more frustrated this year but Lowery doesn't need to be fired for a million reasons.

Two reasons that stand out the most:

No small-market team can afford to fire a coach who recently started a $750,000-a-year contract and this is no exception. It took a miracle to keep him here to begin with. There were big name schools after him with deeper pockets, not to mention the fact that SIU is struggling financially anyway.

And even if money weren't an issue, Lowery's track record indicates that everything will be fine.

As Alfonso Soriano once told Cub fans: "Be Paitient."

You see it was the problems and mistakes Lowery made during his first two-to-three seasons at the helm that are affecting him now.

I realize that sounds crazy because the team went to the second round of the NCAA Tournament his first season, then reached the tournament again in his second and completed the spectacular run with a Sweet 16 appearance his third year, but he did that with Bruce Weber and Matt Painter's players.

That was always my knock against him but he fixed that this year.

The thing that kept the line moving from 2001-2007 was great coaching, continuity and great recruiting. But the last part disappeared in 2005 to an extent.

SIU has always relied on a dominant back court and each year or so, a new duo would take over without any drop in production.

But since 2005, there were a few players who never panned out and the ones who did, didn't become superstars. Couple that with some tough luck in recruiting and you have a recipe for back-to-back letdown seasons.

Take Bryan Mullins and Matt Shaw for example. Both players came in and started at some point as freshmen and did a respectable if not remarkable job for their age.

But as we saw last season and to a different extent this season, they were never able to really build much on what they had already done.

Shaw was supposed to form a dynamic duo with fellow senior Randal Falker last season but it never panned out.

Sure you can blame the brutal schedule but they didn't deliver in the conference tournament either. Falker was constantly being double-teamed and Shaw and Mullins weren't big enough threats offensively to take the pressure of him.

This season we've seen great things out of Mullins before he got injured but we didn't need a pass-first point guard anymore. We needed a scorer.

Obviously this isn't an offensive oriented team but you need a go-to-threat and as the senior leader, Mullins should have been it.

Obviously this is no knock on Mullins, he did his job as a great point guard and played unreal defense but he didn't have a whole lot of help because Lowery failed to lock up local standout Josh Tabb.

Part of this wasn't Lowery's fault because Tabb had to sit out a year because of academics and then decided Bruce Pearl and the Rocky Top Vols were too good to ignore.

The problem with that year is that Lowery never rebounded from a recruiting standpoint.

The year before he thought he could get something out of Wesley Clemmons eventually but here we are five years later and he's still an sixth man at best.

The two post players Lowery reeled in were busts and never looked capable of playing in the Missouri Valley Conference. Those players, Jordan Armstrong and Christian Cornellius were level headed guys, just not premier basketball players, or even bench players.

Fast forward to the next year of recruiting and you'll find a couple of quick fixes but no long term depth or star power.

Transfers Kobby Acquah and Tyrone Green were fun to watch for different reasons but neither offered any help past the Sweet 16 season.

The only other player of note in the class was Josh Bone, who had a rocky few months of play before transferring this season.

So by my count, out of his two recruiting classes that should still be around, he has one player left on the team (Mullins).

That's an absolutely brutal indication of just how bad Lowery was at recruiting initially.

It wasn't untill the 2007 recruting class that we finally saw glimpses of Lowery's recruiting abilities (a deep tournament run didn't hurt either).

But even that class was tainted with a defection/disappointment (Brandon Wood).

Carlton Fay was the gem of the class at the time, although Justin Bocot may have something to say about that, and Nick Evans could eventually provide help in the post.

Fact of the matter is SIU had only a couple of players they could use this year with any kind of confidence.

Mullins and Fay were the only significant pieces to return this season (I don't count Tony Boyle).

Now you can see why the Salukis are where they are despite a dynamite recruiting class they had in 2008.

There wasn't enough depth because of bad early recruiting and defections. The defections aren't on Lowery but the bad talent evaluation is.

I don't miss Bone, Wood, Cornellius, Armstrong or Torres Roundtree (this year's defection). Four of those players weren't very good and the fifth (Roundtree) just got kicked out of JUCO for drug problems.

I do miss some kind of depth or star power Lowery failed to provide during his first few years on the job.

But you live and learn and Lowery has.

I thought the high-water mark for this team was 18 wins and that seems lightyears away at this point.

Either way, this was going to be a rebuilding year but despite the young crop of talent SIU has, the depth doesn't improve much next year.

The good news is, we've at least seen flashes of certain players to know there is a bright future ahead.

Now is the time to use the opened scholarships on junior college players to provide desperately needed depth.

Tony Freeman should be dynamite next year at one of the guard positions and in turn will move one of the three freshmen guards to the bench. The questions become who and how they will handle it.

In different ways, Kevin Dillard, Ryan Hare and Bocot has shown they are capable of holding down a starting spot, but who becomes the sixth man? Perhaps Lowery would switch to a four-guard offense.

If there's no change in the set up of the lineup, you have to figure the battle is between Hare and Bocot because Dillard is a pure point guard who is currently leading the team in points per game.

This isn't a bad dillema for a team sorely needing depth but the player who heads to the bench has to buy into that role for a year before Freeman vacates it.

Couple that with Fay and either Anthony Booker or Evans and you should have a pretty solid starting five if Fay and the rest of the squad take that next step.

Say it pans out this way.

That sounds like a rock solid starting five despite the youth and inexperience.

Couple that with Evans and Hare as some of the first people of your bench and it sounds even better.

So be paitient with Lowery for another year and let's see what happens.

In the meantime, his goal should be adding two or three players who can come in and make an impact of the bench immediately.

You can't say the MVC winning teams in the first three years weren't his players. He served as Weber's top recruiting assistant. Doesn't he deserve as much credit for bringing guys like Falker, Young, etc. as he is getting the blame for flameouts like Roundtree, Bone, Wood and a flake like Tabb?

Possibly the longest post I have ever read on TBDS, but totally true.

There is no need to give C-Lo the boot. There are not many great candidates and he has proven he can win. Give him some time.