Year In Review: South Siders slug their way into playoffs 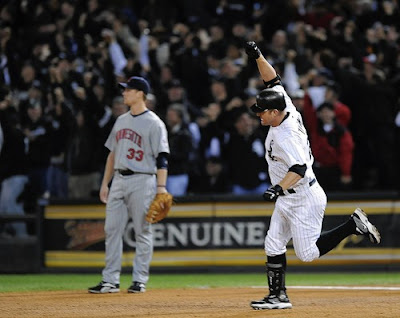 [Ed. Note: This is the second in a series of stories that I found inriguing in 2008. This series will cover a storyline from the year that was from the perspective of the Cubs, White Sox, Bears, Bulls, Blackhawks and SIU football and men's basketball. This post takes a look at the White Sox's play for the postseason.]

The Chicago White Sox had no business being in the 2008 American League playoff hunt, let alone win a single postseason game.

Yes, the only Chicago baseball team to win a playoff game this season was the White Sox who used a breakout season from outfielder Carlos Quentin to spark their efforts. But coming into the season, they had no chance.

One year after finishing 72-90 (3 games ahead of last place Kansas City) the South Siders were expected to finish near the bottom of the AL Central, again. The Detroit Tigers were expected to score 1,000 runs with the addition of third baseman Miguel Cabrera. CC Sabathia and Fausto Carmona were supposed to lead the Cleveland Indians back to the ALCS, at least. And the Minnesota Twins were going to ride the young bounty they received from the New York Mets in exchange for starting pitcher Johan Santana.

And yet, the White Sox (89-74) were the ones popping champagne when it was all said and done thanks to the pop that came from their bats.

Quentin missed the final month of the season with a wrist injury and finished at the top of all the very important offensive categories for the Sox. He finished with a team-best 36 home runs, 100 runs batted in, 96 runs scored and a .965 OPS. Right fielder Jemaine Dye finished with the team's best batting average (.296) as he chipped in 34 homers and 96 ribbies.
After struggling in April, rookie Alexei Ramirez smacked AL pitchers like they owed him money. The Cuban Missle struck with 22 home runs and 77 RBIs and a .290 batting average to go along with four(!) grand slams.

Jim Thome and Paul Konerko also overcame slow starts to combine for 56 dingers and 152 driven in.

2009 Outlook: Don't expect Kenny Williams and the White Sox to throw money around like a drunken sailor this offseason. Instead, look for minor re-tooling efforts as the White Sox will look to land some rotation help after dealing Javier Vazques to the Atlanta Braves, and a second baseman as Ramirez moves to shortstop. The Sox should be better (on paper) next year with the subtraction of Vazquez, and since the only other major move done by an AL Central team (Clevaland) was sign former Cubs closer Kerry Wood, the division might be up for grabs again.

However, the team has to fill the vacancy in center field (and in the Chicago bar scene) left by Nick Swisher.

The Sox are good for making some notorious moves as spring training gets closer to opening its gates. So stay tuned.