Saluki Hoops On The Defensive 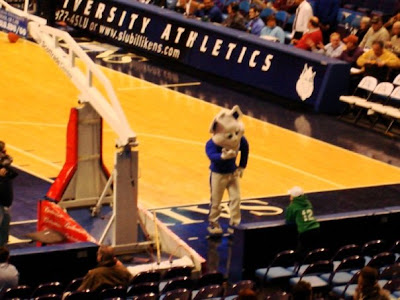 The SLU Billiken tries his newest pickup line on the youth of St. Louis.
Today's blog is brought to you by the letter 'D', which seems to be missing from the SIU men's basketball team's alphabet.

The Salukis have made a living in recent years in the shorts of their opponents. On the defensive end, they've been led by gritty man-to-man defenders such as Bryan Mullins, Tony Young and Darren Brooks. The last few years, they've even had Randal Falker swatting away feeble attempts to score.

Mullins, the Missouri Valley Conference's defending Defensive Player of the Year, is still on the squad and is SIU's best on the ball defender. As for his teammates ... I don't know. I'm not sure.

Senior forward Tony Boyle is a big, strong body who should be an enforcer in the low post. But it seems as if he has two fouls against him as soon as he steps on the court. Freshman guard Torres Roundtree has shown in flashes that he has the skillset and athletic ability to be the kind of shutdown on-the-ball defender, but he is still getting his legs under him as he has missed some time early in the season. Teammate Ryan Hare is reminding me a little of former Saluki standout Stetson Hairston. A rim-rocking slasher with solid defensive skills.

It's not like there isn't talent on the court. It just hasn't gelled yet.

Against Duke and UCLA, the Salukis fatigued down the stretch. Tired legs left jump shooters open. Jump shooters at Duke and UCLA make open jumpers. It was a recipe for disaster and it has left a bitter taste in the mouth of not only Saluki fans, but their head coach.

Chris Lowery isn't a happy camper, I can tell. And I don't blame him. In the beginning of the year, he and I talked about "feeding the beast."

"The beast" is the expectations of SIU fans who have grown accustomed to the high-level of play and success of their beloved Salukis. After allowing 70+ points in its last four contests, I can see where "the beast" would be upset. But not as upset as Coach Lowery.

"Our biggest focus is making sure they understand that defense is first in this program and resting on defense is not allowed and is not condoned in this program," Lowery said Monday afternoon during alotted media time before practice.

The idea of slacking on defense not being condoned stands out to me. It's almost as if Lowery has made it a felony to sag on the defensive end. And that's good. With C-Lo preaching accountability to its young players, it's only a matter of time before the youngsters get the picture and start playing the kind of defense that has Saluki opponents saying "damn."

And if they don't listen to coach, they'll get it from the coach on the floor, Mr. Mullins.

"Our guys understand if you want to play in this program you have to play defense," Mullins said.

Coach Lowery and I stepped onto this campus at the same time ... Fall 2004. And since we've both been here at SIU, basketball games haven't always been pretty, but it always ended with a 'W' and that's all that mattered.

Mullins said tonight's matchup against SLU is the biggest of the year because it's the next game on tap and is ready to snap the Salukis' recent three game slide.

And there is no better way to start a winning streak than beating the bejeebus out of the Billikens.