Rafael Furcal's word is worth as much as your stock in Enron, just ask the Braves 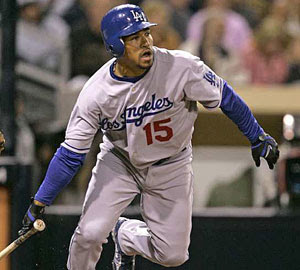 After it seemed as if a reunion with the Atlanta Braves was imminent, free-agent shortstop Rafael Furcal looks to have reversed his course and will likely return to the Los Angeles Dodgers.


Braves GM Frank Wren said the team and Furcal's agent came to an agreement on Monday night and apparently couldn't reach Furcal to sign the contract.

Sounds like code for "we're going to go back to the Dodgers and see if we can get some more." And it looks like they did.

Now, it's Thursday, and Furcal has agreed to a three-year deal worth $30 million to stay with the Dodgers.

This isn't the first time Furcal and his agents have played the bait-and-bail game while on the open market. Last time he was a free agent, Furcal looked to have a four or five year deal with the Cubs before his agents went to the Dodgers one last time and took the rug from right under Jim Hendry's feet as the speedy shortstop signed with L.A.

Look, Furcal is a good player and among one of the best offensive shortstops in all of baseball when he's healthy. He can hit you 10 to 15 home runs, steal you at least 30 bases and get on base at a 40 percent clip.

But if he continues to pull crap like this out of his Dodger blue ballcap, he will be forever known as a two-faced cancerous "me guy" only out for the money.

And a defensively inept shortstop.