No one on the corner has swagger like ... LenDale White? 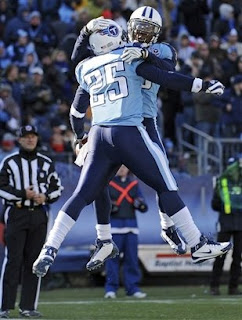 No one is safe from identity theft, not even Tennessee Titans running back LenDale White.

The rotund running back has accused Carolina Panthers running backs DeAngelo Williams and Jonathan Stewart of swagger-jacking (which is a felony in the state of Tennessee) after he learned Williams and Stewart were using the nickname "Smash and Dash" -- which White claims to haved originated.

"If they want a nickname, I can nickname them: 'Identity and Theft,'" said White, who's successfully paired with the speedy rookie Chris Johnson this season. "...I was upset because I made that phrase up myself. I mean I made it up. I don't know about NFL Network and all those other guys. I heard somebody say, 'Batman and Robin,' that's like cute, that's for them. If they want that name they can have it. The 'Smash and Dash' is something I made up."

"We've got a copyright and everything for it, I'll make sure I show the documents," White said. "It's well trademarked and it's copy written. I don't know if we're going to take legal action or not."

But White didn't end there. He's not happy with the ordeal, to the point where he dropped some new-fangled slang on reporters:

"If you guys don't know what that is, it's swagger-jacked and I can't believe that happened to me. Somebody messed up my whole swag and that's not cool."

I was recently swagger jacked the other day and have yet to recover.

And finally, I get to use the "swagger jackers" tag!