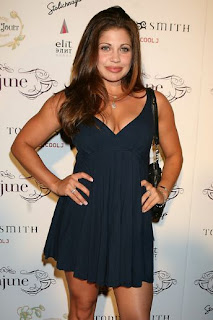 When I was a child the love of my life was Topanga Lawrence. With those looks and a name like Topanga, how could you go wrong?

She's all grown up now and I think she's married to some hockey player. What's with hockey players and pretty girls? It makes me wish I could skate.

But then making fun of those kids who tried showing off and ended up making a fool of themselves at Rockefeller Plaza when I was in NYC two weeks ago wouldn't have been as fun.

Enough of that. On to the Dosage.

Jeff's revenge. Hoops expert Jeff has won this round, but beware of the killer Derrick Rose crossover.

His Milwaukee Bucks beat my Chicago Bulls 97-90 behind a stupendous bench effort from Charlie Villanueva who scored 23 points off the bench (Jim Calhoun wonders where that effort was at UConn) and Dan Gadzuric (he's still in the league) who scored 11 points and grabbed 14 rebounds. Ridiculous!

D-Rose notched a near double-double with 18 points and 9 assists in a losing effort.

Topanga. What have you done to yourself?