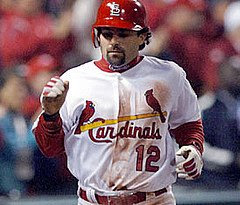 Someone needs to send a memo to Sam Zell immediately because it is time to get a head start on printing those World Series tickets.

Or at least a Home Game #3 ticket for the NLDS.

The Chicago Cubs finally made a move in the free agent market, signing former St. Louis Cardinals infielder Aaron Miles to a two-year deal. But they didn't stop right there. No sir. Jim Hendry then jettisoned one of the team's most popular and productive players, Mark DeRosa to the Cleveland Indians in exchange for some young arms.

Don't expect the Cubs to stop there as they are attempting to move Jason Marquis to the Colorado Rockies, who apparently are overlooking Marquis' inability to keep the ball in the park. Maybe they're moving back the fences ... or just won't start him in home games.

Moving Marquis and DeRosa's contracts means the Cubs can move forward with the signing of switch-hitting outfielder Milton Bradley and possibly renew the Jake Peavy trade talks with the San Diego Padres.

In fact, I'm throwing out the ultimatum to Hendry and the Cubs front office right now. In honor of American patriots not named Tom Brady or Randy Moss ...

"Bring me Peavy, or bring me death."