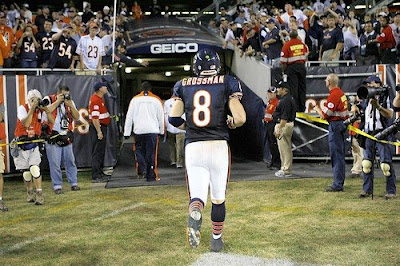 Photo Credit: Frank The Tank
Alright Bears fans, get your stones and throwing arms ready. I know you're not going to be happy with me when I say this, but I must do it: Leave. Rex. Alone.

When I logged on to Facebook yesterday, it was almost as if every one of my friends was blaming quarterback Rex Grossman for the Bears' 21-14 defeat at the hands of the Tennessee Titans.

Unless Rex took on the Titans by himself, I don't believe he should shoulder all of the blame.

I'm thinking this isn't the time to shred Rex, who pulled the Bears to within one score of one of the NFL's best teams.

Apparently, it's just me.

I know Sun-Times columnist Greg Couch went batsh-t crazy calling for third-stringer Caleb Hanie to start, but it doesn't mean you have to. These kind of off-the-rocker columns were best reserved for Jay Mariotti, but I guess someone's gotta fill the role of resident idiot now that he's gone, right?

"If Orton is still out with a bad ankle — and it’s a good guess the Bears will try to rush him back now — then the Bears’ starter needs to be [Caleb] Hanie. If Orton is back, Hanie should be the backup. It’s an impossible spot for the kid, but he’s much better equipped to handle any pressure than Grossman."

Really? Yes, because all that pressure he handled at football powerhouse Colorado State has prepared him. Yes, all that preseason pressure he overcame to beat Nick Hill, a quarterback that I would argue never got a shot to show he was that much better than Hanie.

On top of that, you want to put him right into the fire of a division title race against the Bears' biggest rivals. That's a bright idea. Can't wait to see him melt under the pressure like a wicked witch.

Thankfully the insightful Rick Telander is here to save the day:

"...the Bears would now be 6-3 and the league-best Titans 8-1 — if only gimpy Kyle Orton had started at quarterback … That might be true. But it’s tiring to keep ripping Grossman. Haven’t we done that?"

Been there, done that. Thanks for making sense, Rick.

Defensive coordinator Bob Babich must be thanking his lucky stars that everyone in Chicago is aiming its fury Grossman's way, as it was his defense that allowed Kerry Collins to look like Peyton Manning.

289 yards and two touchdowns for Collins, really? Being burned by the arms of Collins and Brian Griese are fireable offenses in my book.

It makes me wonder what Grossman could have done against this so-called defense.

Grossman sucks. Plan and simple. I have said it for how many years now, and I do believe that at one point you words were that you agreed with me. Hmmm. Interesting that now you are defending him. Now I do agree that Grossman is not the sole individual responsible for the loss. The Bears as a team could have played better. But overall, looking at individual performances, Grossman was being Grossman. And we both know that he is not equipped to handle the pressure at this level, which is a shame because all that talent is going to waste. But yes, I would also like to see Hanie start if Orton is still out on the grounds that, Both Grossman and Orton started earlier than expected and both had faily successful records. So why not let Hanie prove that he beat out Nick Hill and deserved the spot. Also I suggest release Grossman and signing Nick Hill. But that is just my opinion.

Psh I'll go ahead and say that that friend is me and yea I can say that Rex basically let down the game. Maybe not on the field but as a leader. I can tell that when the team is on the field with Orton they feel like they have a leader and the whole mood changes. When Rex jumps in, I don't see him commanding respect like a QB should from the team. and that's why i dont like grossman. i also have a crush on orton so there.