Cubs cut ties with Wood, prepare to usher in a new era of suck 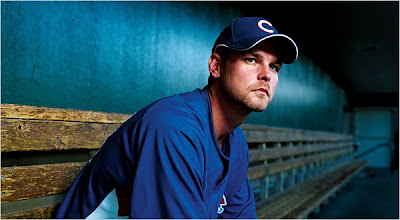 We'll miss you, Kerry. Photo: NY Times
If 100 years of bad baseball wasn't enough, it appears as if the Chicago Cubs are ready to ring in a new era of suck starting from the top.

After acquiring Kevin Gregg in a trade with the Florida Marlins, Hendry announced that the Cubs were cutting ties with Kerry Wood, one of the franchise's most popular players.

Not only is this a terrible move for a team on the brink of something special last season, it's a piss-poor move for a team that should be looking to appease a fan base that was teased with a 97-win season only to fall flat on its face when the playoffs rolled around.

It's a move that doesn't make sense, not now. Heck, I'm not sure if it ever will.

Saying that there isn't enough money to give the face of the franchise while also trying to find a multi-year deal for Ryan Dempster - who wasn't willing to negotiate during the exclusive negotiating period - is just wrong. It's that kind of treatment of core players, whether it was Mark Grace when he became a free agent or Greg Maddux when his time came around, that has Cubs fans crying and pleading for Mark Cuban to take ownership as soon as possible.

It won't happen. Because good things aren't destined to happen to the Cubs or their fans.

So it's not worth even continuing with this post.

I just wanted to prepare Cubs fans for an offseason of bad decision making, which should adequately prepare baseball's most tortured fan for another late-season letdown.

And no, trading for Jake Peavy isn't the cure-all.