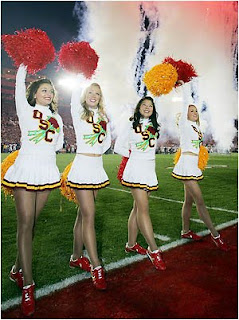 I realize I don't do a lot of stuff on college football on this blog, but I should. I don't always find the NFL interesting unless it's opening week, a rivlary game, a made-for-TV matchup or it's playoff time.

But I'm always down for some college football action ... and USC Song Girls, of course.

Oh yeah, the Trojans won by a pretty good margin. If they want to return to the title hunt, they're gonna need some losses at the top and will definitely need to continue to blow every other team in the Pac 10 (and Notre Dame, of course) out of the water.

That's enough of that, let's take a look at some intriguing games.

Including one in my backyard.

The Salukis put up 35 first half points and led by 14 at the half, but JackRabbit QB Ryan Berry led his team on a furious comeback to tie the game at 35 in the third quarter. However, the SIU defense kept Berry and the bunnies off the board in the 4th quarter.

In fact, the only fourth quarter score came off the foot of sophomore Saluki kicker Kyle Dougherty. It ended being up the deciding score.

And that sentence couldn't even have been written until the games final moments. Berry led SDSU on the kind of drive that Hollywood script writers have dreams about. However, SIU cornerback James Wheeler, who Berry victimized all day, came up with the game sealing pick.

It was Berry's second of the day, his first was returned for 57 yards by safety Marty Rogers for a touchdown.

If the Salukis can beat rival Illinois State next Saturday, they would secure a share of the Missouri Valley Football Conference title.

Michigan hits rock bottom, loses to Northwestern at home. There's no shame losing to Northwestern, unless you have to deal with their campus cops that don't care about black people, their "homer" sports writers cheering in the press box, or if they've got Darnell Autry and Dwayne Bates lining up on offense and Pat Fitzgerald on the defense.

Well none of those players were a factor as the Wildcats beat the Wolverines, 21-14, at the Big House. That pushes Michigan to 3-8, the most losses in school history and they still have yet to face THE Ohio State.

Rich Rodriguez is a bad man, so failure couldn't come to a better person.

Tide continues to roll. I'm pretty sure I'm the only person not affiliated with LSU that hates the idea that Nick Saban could be on his way to a national title in Alabama. Maybe it's wrong that I cheer for that gigantic elephant mascot to fall flat on his face. But maybe I'm right.

Maybe I should cheer against a coach that left Michigan State after building it up. Then left LSU for the Miami Dolphins after rebuilding them. Then left Miami after failing miserably for Alabama.

Papa was a rolling stone ... and not the Mick Jagger kind either.

That's why I want them to fail. Here's hoping Urban Meyer can smoke 'em in the SEC title game. I like them, they're fun to watch!

Speaking of LSU ... The Tigers pulled off quite the comeback win against Troy, scoring 30 points in the fourth quarter to complete the 40-31 come-from-behind win.

It's too bad they didn't have it in them last week against Saban. That would have been even sweeter.