Someone needs to keep an eye on Brad Lidge 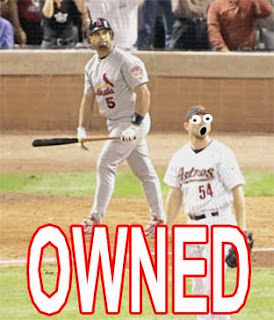 Maybe I'm the only person who remembers the last time Philadelphia Phillies closer Brad Lidge was in the clinching game of the NLCS.

It was Game 5 of the 2005 NLCS and last I checked St. Louis Cardinals first baseman Albert Pujols hit a home run at Minute Maid Park that still hasn't landed.

Three years later, Lidge is lights-out once again and his team is one win from clinching the NL Pennant.

But with two outs in the bottom of the ninth, can Lidge be trusted?

Will he have visions of Pujols dancing through his head?

I guess we find out tonight.