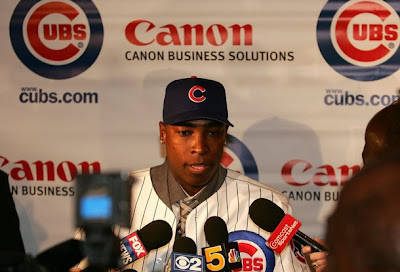 Since the day he signed that massive eight-year $136 million deal with the Chicago Cubs, I've defended Alfonso Soriano.

A few weeks ago, the TBDS' hoops expert informed us that New York Knicks guard Stephon Marbury was clinically insane.

I'm here to say the same about Soriano, via the Daily Herald:

Really, Fonzie? You're not serious right.

Do you realize what you just told millions of passionate, brokenhearted fans after you went 1-for-14 in the biggest choke job in my lifetime?

You just told a fanbase that hasn't won a National League pennant since the World War II, a World Series since the introduction of the Model-T or a frickin' playoff game since gas was at an affordable price to "keep patient."

This coming from a guy that spent his second-straight October flailing at breaking balls in the dirt in the left-handed batters box.

But wait, The Fonz is not done. Via the Chicago Tribune:

OK, if that's the case, you can give Jim Hendry what's remaining on your contract so he can bring in Manny Ramirez, Adam Dunn, CC Sabathia or anyone that can make the Cubs built for a short series.

Fonzie, if what you say is true then you need to realize that you're part of the problem.