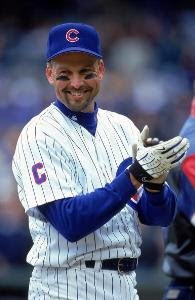 McCain who? Mark Grace is the true conductor of the "Straight Talk Express."

Summing up the Cubs' brief appearance in the postseason, Grace said they ''rolled over'' and should be humiliated.

''They [bleeped] it up, honestly,'' said Grace, who's covering the World Series as an analyst for Fox. ''That's twice now that this same group of players has gone out and played tight. ... I mean, come on, dude, are you kidding me?

Grace would likely be the top candidate to replace Bob Brenly as the TV color analyst if BB takes the Milwaukee Brewers managerial gig.

And before you ask, no, he doesn't believe in curses. I like that.

''No, because it was the same [stuff] all year long,'' he said. ''It wasn't the first time they heard about it. I have to say no on that. Honestly, that team for some reason, when [James] Loney hit that grand slam, you're only down two runs with five innings to play and that team just laid down. The place turned into a tomb. Damn, you're just down two, and you had come back all year. The team laid down.

I was at that game and that's how it felt from the crowd. The air was let out of the balloon and a majority of the folks that were there (you know, the corporate bandwagon type) hopped on their Blackberries and probably started making connections for later that night.

Lucky for them, they were able to drink their sorrows away in Wrigleyville. Some of us had a 5+ hour drive back to Carbondale to deal with this mess.

More from DeLuca, there is no news on the Brenly/Brewers front. However, Grace puts a scare in me if BB does get the job in Milwaukee.

''I guess I would call him an anti-Ned Yost. He's a little more loose. The fun meter will go a little higher for whoever he manages. He's a world champion.''

As much as I love Lou Piniella and wanted Piniella to manage the Cubs to a World Series, I always throught Brenly would have been the PERFECT fit for this group. I said it when Dusty Baker was fired. I said it in 2006 when he should have been fired. My pleas to the Cubs seem to always go on deaf ears.