The Price is Right: The Rays are AL Champs! 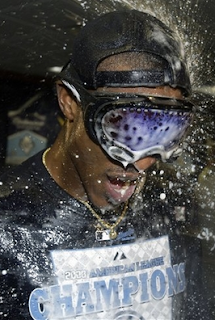 You know what this world needs?

More clever headlines referencing one of the greatest television game shows in history and the name of the No. 1 overall pick in the MLB Amateur draft.

Oh and more cool celebration shots like the one on the right.

Anyway, I'd like to send a personal shout out to the Tampa Bay Rays, who by virtue of their 3-1 victory in Game 7 of the ALCS, put to bed any possibility of the New England area having another championship run.

I know I'm not the only one who's happy to see it come to the end.

As for the Rays (a team without a batter with a .300 batting average and a payroll that mirrors what Ted Lilly is getting over four years) they'll be going to the World Series.

While both Chicago teams, both New York teams, both Los Angeles area teams and ESPN's love-children will be at home watching the World Series like the rest of us.

Oh yeah, and the Philadelphia Phillies are playing too.

Hey Lu, Check out Al's morning meeting humor...
about the high price of Rays' souvenirs.
He says, "You could just buy a Poynter cap for $10 and tell people that we are in St Pete, where the Rays play."