Pacman Jones is going on vacation 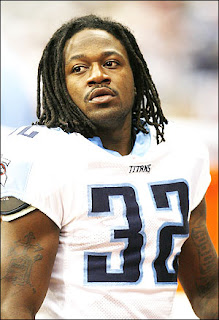 I hope Las Vegas has flood insurance because Pacman is coming and will likely bring the kind of storms that LV hasn't seen since June when Hurricane Cantina rolled through.

All jokes aside, Pacman's altercation with his hired help has cost him at least four weeks.

And to be honest, I'm not sure if it deserved this kind of suspension. No one got shot. No strippers got decked. Hell, if anything, it'll give a Redskins, Eagles or Giants fan incentive to start sh*t with Pacman's bodyguard.

Because if this incident gets him a suspension, NFL commish Roger Gooddell is going to hand down the death penalty (or at least 25-to-life) for whatever Mr. Make It Rain does next...even if he sneezes the wrong way.

Poor Pac, he hasn't had fun in a while and now he gets suspended over some guff with his body guard.

Good luck to the Cowboys. I hope Roy Williams can play QB.