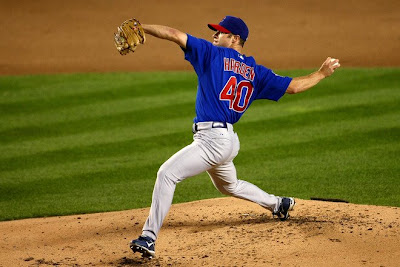 When the Chicago Cubs acquired Rich Harden prior to the All-Star break, it wasn't just to get the Cubs to the playoffs.

It was to get them to and beyond.

The only thing standing between the Cubs and being swept for the second straight year is the 6-foot-1 flame-throwing Canadian.

Harden might be the best Game 3 starter in baseball history. The Cubs went 9-3 in Harden's starts and in his worst outing as a Cub (against the Houston Astros) he allowed four runs in 5.2 innings and struck out eight batters.

While CC Sabathia going to Milwaukee grabbed all the headlines, Harden did his part to help the Cubs get to the playoffs.

As the Cubs' playoff dreams are on life support, it's up to Harden to recessitate them.