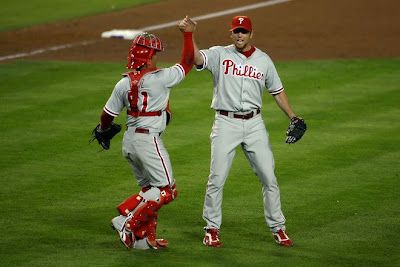 Photo credit: Getty Images.
This is part one of a two-part series in which I write about how jealous I am of the teams remaining in baseball's League Championship Series.

The Philadelphia Philles have a 3-1 lead in the NLCS, putting them one game away from their first World Series appearance since 1993.

As a baseball fan, there's a part of me that cares.

As a tortured Cubs fan, I want to say f*ck this series!

The Los Angeles Dodgers have no business being in the playoffs, let alone the League Championship Series.

I don't care what Ned Coletti thinks because if it weren't for Manny Ramirez the Dodgers would be watching the playoffs from the comfort of their collective homes.

OK, the return of Rafael Furcal helps (a lot) and Andre Ethier, Matt Kemp and James Loney are solid youngsters that are budding stars.

But I still can't put together how an 84-win team in the worst division in baseball beat the team with the most wins in the National League that played in a division with four teams that were over the .500 mark.

I guess having the right combination of people that have been there, done that (Manny, Derrek Lowe, Joe Torre) and clueless youngsters (Kemp, Loney, Jonathan Broxton) can help you pull a surprise.

As for the Phillies, I understand how they got here, one game away from the NL pennant.

And as I look up and down the Phillies' roster, I'm jealous.

Not just because they're on the brink of winning the pennant, but because of what they've got.

They've got an ace starter in Cole Hamels, who is sane. Not that I don't like Carlos Zambrano's insanity because I think it brings something special to the team. It's a fire that doesn't come in most players.

They've got speed with Jimmy Rollins and Shane Victorino, who combined to swipe 83 bags this season.

The Cubs only stole 87 bases this year led by Ryan Theriot's 22.

They've got power in the middle with the lefty sticks of Chase Utley (33 HRs) and Ryan Howard (48 dingers) and the right-handed heavy hitter Pat Burrell (33 bombs).

But at least his OBP continues to rise (.380 this year compared to .366 and .352 the last two years) and his defense has been Gold Glove caliber of late.

The point is that despite the wins, run differential and the ultimate motivation of being titleless since the dawn of man kind, the Cubs weren't able to do what they were expected to do.

Eh, what else is new.