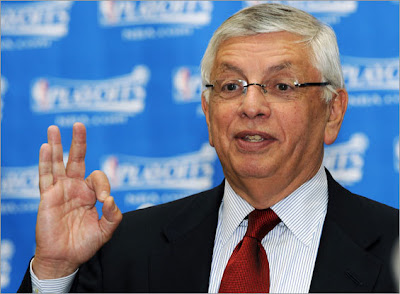 The NBA season begins Tuesday night, but it will be missing something in the great NorthWest.

That's right. The proud franchise that launched the careers of Gary Payton and Shawn Kemp is no more. Instead, there is a franchise in Oklahoma City thanks to the relationship between Clay Bennett and NBA commish David Stern.

That's right, Oklahoma City. The home of zero professional franchises in any of the four major professional sports.

But it's OK, according to The Commish. There's plenty of basketball to go around.

"We understand the fans and their anger, frustration, depression."

But wait, there's more via seattlepi.com:

"You know, we have something over 900 games available on NBA League Pass, either on cable or satellite, and potentially broadband and NBA TV where we have four games a week," he said. "So there's a lot out there in terms of content and a lot of an ability to follow our league. If they are so inclined, then we certainly invite them and welcome them."

That's right Sonics fans. The man who helped orchestrate the theft of your favorite franchise still wants your business. Go buy NBA League Pass. Why limit yourself to one team when you can catch every team with NBA League Pass. Heck, while you're at it go to ShopNBA.com and buy some old-school Sonics gear.

Yep. Sums it up quite well, actually.