Daily Dosage: Return of the Jedi 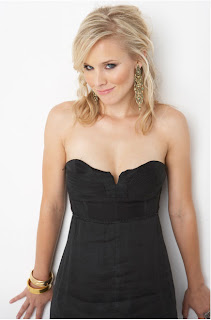 There's no way to get back on the saddle with an idea that put this site on the map.

So today, we feature Kristen Bell, fresh off my viewing of 'Forgetting Sarah Marshall' - a movie that will be reviewed by myself for public consumption soon.

As for the sports stories, check out this bit of shameless cross-promotion, a story about the SIU men's golf team, which has won two of its first three tournaments.

A Harden decision to make. What made the Chicago Cubs' acquisition of Rich Harden a better deal than what the Milwaukee Brewers did to get CC Sabathia was that Harden could still be property of the Cubs for the 2009 season.

Harden will visit a shoulder specialist before the Cubs make a decision whether or not to pick up the right-handers $7 million option for next season. Even though it seems like a tough decision, it seems like it would be quite easy.

If Harden's 100% clean, then an off-season of rest and relaxation should be in store for one of the Cubs' most prized arms. If not, the Cubs should still pick up the option, because any surgery would likely put him out until May, which his return would be like another Cubs mid-season acquisition.

Williams searching for speed...no, not that kind of speed. After assuring Nick Swisher's spot on the team for the next few years, White Sox GM Kenny Williams isn't finished.

Expect the White Sox to add a lot of speed. A lot.

The White Sox have several holes to fill, including second base (once Alexei Ramirez takes his rightful place at shortstop) and center field. Both are positions where there are some speedsters available.