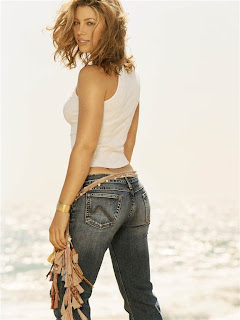 The Chicago Bears should be 6-0! Argh!

The Cubs and White Sox should be in their respective league's LCS! Argh!

The Bulls should have Baron Davis running the point and Michael Beasley in the post! Argh!

I guess you get my point.

Despite Sunday's mess, this is going to be a good week at TBDS.

For starter's: Jessica Biel is your morning eye candy.

Somewhere, Justin Timberlake approves. But so does Derrek Jeter. Argh!

On with the Dosage!

Jason Elam boots the Bears into first-place tie. Someone needs to tell me why the Bears aren't 6-0 and leading the NFC North.

Since I'm sure no one can (and no one would want to) I'll try to figure it out my damn self.

It's part Kyle Orton's fault, because even though he threw for 286 yards and what should have been a game winning touchdown, he couldn't lead the Bears to any first-half touchdowns.

It's part Ron Turner's fault because he's using a high school playbook. I know the Bears toasted the Lions secondary last week, but me and 10 of my friends could put up similar numbers by drawing plays in the sand.

It's part Lovie Smith's fault, because his philosphy (which is winning with successful special teams and defense) failed when his team (which is built around a strong defense and an above average special teams unit) couldn't hold an 11 second lead.

FANTASY IMPACT: Fantasy owners who had Bears in their lineups were rewarded with lots of points. Orton's 286-yard, 1 TD day was good enough for 15 fantasy points. Matt Forte's 110-yard 1 TD performance was good enough for 16 points. Even Rashied Davis scored 10 points with his 41 receiving yards and 1 TD.

In the end, the Bears' fantasy success wasn't good enough to avoid the nightmare finish in Atlanta.