Daily Dosage: Back for the first time 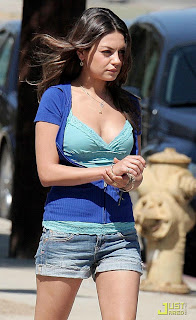 To me, she will always be Jackie from That 70's Show.

Alas, Mila Kunis is today's eye candy because she's all grown up.

Kelso, Hyde, Fez...all lucky men. Especially Fez, he got "Jackie" and Lindsay Lohan under his belt.

As for today's shameless cross-promotion, a Blog War about which is the best sports city in the world.

On with the Dosage!

You can't spell offense without O(rton). One of the biggest surprises for the Chicago Bears this season has been the recent play of starting quarterback Kyle Orton.

While Rex Grossman sits on the sidelines, which is the closest most Bears fans want Grossman to the field these days, Orton has thrown seven touchdown passes in the last three games.

How's he doing it? By not listening to Ron Turner.

Actually Turner said that it is Orton's even-keeled attitude that is helping the former Purdue Boilermaker progress.

I still like my theory of not listening to Turner.

He was placed on waivers and was unable to be traded, so he is back with the Blackhawks and is "happy" to be there.

As it now stands, Khabibulin and Huet will work together as the team's "co-starting goaltender."

This could be a blessing in disguise for the 'Hawks. If they properly use its star goaltenders, they will be fresh for a run at a (dare I say?) Stanley Cup.

A Rose begins to bloom. This is the first of a million blooming or blossoming Rose headlines I will use this season, so get used to it.

All eyes will be on No. 1 overall pick Derrick Rose, who makes his exhibition debut tonight against the Dallas Mavericks at the United Center.

The Chicago native has a lot of weight on his shoulders. The pressure is on him to turn around a team that was expected to make a deep playoff run last season with the help of a bunch of former great collegiate players.

I guess he should fit right in.