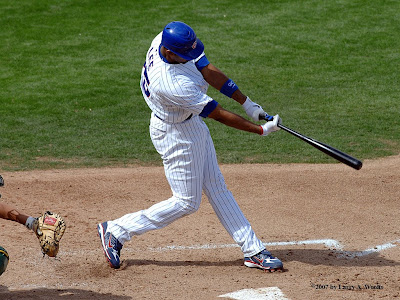 I'm sorry Derrek, your Gold Glove defense and steady bat are no longer welcome here.
This is what happens when failure occurs.

People jump off the deep end in search of a quick fix. Why? Because no one is happy with themselves anymore.

It makes no sense. Sure, the Cubs choked. They did it badly and on a national stage with Dick Stockton presiding over the death of a nation (and good ratings in future playoff rounds).

But it doesn't mean you have to blow it up and start all over. This blog comes close. What it takes him 3,500 words to write, I will attempt to do in 500 or less.

But that will come later, for now, enjoy this teaser.

"We'd take that, of course, but the lesson is: when the Yankees were winning titles, they did it through putting a fine team on the field that had, in large part, been developed in their own system, complemented with good role players (Scott Brosius, Paul O'Neill), instead of simply trying to put an All-Star team on the field. It is worth noting that as soon as Alex Rodriguez left the Mariners, they had several of the best seasons in their history -- and as soon as he signed with the Rangers, they had three of the worst in theirs. Following his signing with the Yankees, they ended a run of appearing in six World Series in eight years -- they haven't been there since. Now, I'm not blaming A-Rod for the Yankees' failures; the point is that simply salivating after someone because he's on a free agent list and puts up gaudy statistics doesn't make a team a winner."

Great point! Who needs a career OPS of .967? How about 553 career home runs, most of which came while he was as a shortstop. Not this team. Not any team. I don't know why the Yankees have him around anymore, maybe they should just trade him to the White Sox for the Grinderball 101 Instruction Manual.

"I think it's time for the Cubs to say goodbye to Derrek Lee. D-Lee is a class act and has given us five (mostly) good years. He will be 34 next September, has two years left on his deal, and a year from now I suspect will be almost untradeable. With that, unload him to the Giants. D-Lee is a native of northern California (Sacramento); the Giants seem to like getting hold of older players who still have something left in the tank; and they can afford him. In return, I'd like Matt Cain and lefty reliever Alex Hinshaw. Don't slot Cain into the rotation yet, though; I'll explain why later."

Another great idea! Let's trade our All-Star, Gold Glove first baseman and one of the two hitters that showed up for this postseason for a guy who would fit in as the Cubs' No. 3 starter - who by the way you wouldn't start. Genius! Let's see how this plays out.

"To replace Lee, it will require a trade and a free agent signing; I'm going to suggest a platoon, and there's a reason for that. First, acquire Aubrey Huff from the Orioles."

Let's assume that the Cain-for-Lee deal went down and the Cubs wouldn't have a first baseman. The first thing I'm doing isn't trading for Aubrey Huff. If I'm trading with the Baltimore Orioles it's for their SECOND BASEMAN Brian Roberts, not their defensively-retarded designated hitter.

I won't even go into the idea of acquiring Luke Scott to play right field and signing Kevin Millar. How many games did the Orioles win this season? Not enough to make the playoffs, that's for sure!

"Jason Marquis, who was the best fifth starter in the game last year, will, under my scenario, bid a fond farewell to the Cubs and re-emerge in his hometown, New York, for either the Mets or Yankees, both of whom could use an inning-eater like Marquis. In return for one of the Big Apple teams taking over the $9.875 million left on Marquis' contract, all the Cubs require is to get a face-saving prospect or two."

Nobody wants Jason Marquis! Not the Mets. Not the Yankees. Not his parents. Not Dusty Baker's little league team. No one. And if by the grace of God that somebody wants to give you something for the Grand Marquis, what about that fifth starter spot that is empty because you're not going to start Cain and you already traded Sean Marshall for Luke Scott and Aubrey Huff.

"And that leaves the fifth spot open. But you're saying, having read my epic saga so far, "Wait! Didn't you trade for Matt Cain 17 paragraphs and a blockquote ago?"

Yes, I did, but Cain isn't going to pitch a single inning in a Cub uniform. Instead, he's headed to the Marlins, along with Felix Pie (told ya I'd get to that!) in exchange for Ricky Nolasco.

Finally, getting Nolasco back, just at the time he's probably headed to his peak years (he's 26 in December) would right the massive wrong Jim Hendry did when he sent him away for Juan Pierre three winters ago."

Yes, the same Ricky Nolasco that the Cubs traded for Juan Pierre. And why does this make sense? Because Nolasco isn't the best guy, instead, he's the "right" guy.

This is baseball, not "Make Up To Break Up." Ugh!

"I'm not going to get into specific dollar amounts, but just looking over what I've done here, I have removed $13 million of Derrek Lee's deal (and Bob Howry's $3 million and the $1.2 million Daryle Ward earned is gone too); that's $17.2 million gone, probably eaten up with the additional money paid to Johnson, Edmonds, Dempster and Wood (above and beyond what those men made in 2008, a total of $15.5 million -- it'll take about twice that to retain those four). In addition, subtracting the $11.5 million that was due to Kosuke Fukudome in 2009 and Jason Marquis' $9.875 million should cover Aubrey Huff's $8 million and whatever is paid to Luke Scott and Ricky Nolasco. That might make this roster cost virtually the same as the 2008 team, something that ought to be manageable given the uncertain state of the sale of the team and the overall economy.

And that, I believe, is how you build a team. Not "blowing it up", not throwing multiple millions of dollars at a free-agent dartboard, but carefully, taking advantage of the assets you already have to keep a team performing at a high level, and take it to the next one."

I'm done. I've got a story to write about college football. And I promise it will be less than 3,500 words.