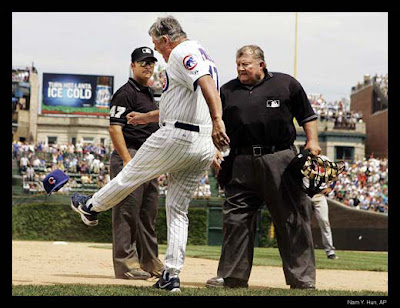 Lou Piniella's kicking out whoever sucks. That's how he rolls.
Earlier I detailed the ideas of a certain blogger who wrote an epic tale about re-working the Chicago Cubs. However, he retooled the Cubs with a similar payroll and somehow ended up with worse players than with what the team started with.

So I've decided that I can do a better job of retooling the Cubs and make them not suck as much as this projected team. And I'll do it in less than 500 words. I guarantee it.

And away we go.

Catcher: Geovany Soto. Why? Because he's the rookie of the year and hit .285 with 23 home runs and 86 runs batted in. Back him up with Henry Blanco and you've got a solid catching tandem. Even if Blanco doesn't hit .292 off the bench, he's still better than Koyie Hill.

First Base: Derrek Lee. If you can trade Lee for Matt Cain, I'd take it. But the Giants aren't that stupid and if they were then the Cubs could take the millions they'd save and throw some cash at a better option than Aubrey Huff. Mark Teixeira, anyone?

Second base: Mark DeRosa. DeRo had a career-year and hit the only post-season homer for the Cubs. It's nice to show up for playoff games when you're the favorite to win the whole damn thing. Unless Chase Utley becomes available, the only other option would be trading for Brian Roberts and moving DeRo to right or to first if the Cubs trade D. Lee.

Shortstop: Rafael Furcal. This is one of the few spots where the Cubs can make a true upgrade. As good as Ryan Theriot was last season, the Cubs would be better off using him sparingly in a Super-Utility role. Furcal is the true lead-off man the team has been missing forever. Throw some cash at him and get him in Cubbie-blue pinstripes already.

Left field: Alfonso Soriano. Sure, I'd like to move Sori, but who would be dumb enough to take that contract? Is that the Dodgers I hear calling? Manny Ramirez is as good as gone and the Cubs should do everything in their power to get him on the North Side. That will only happen if Sori gets shipped out. It's your move, Jim.

Right field: Adam Dunn. I was this close to going with Ken Griffey Jr., but the Cubs need Dunn (especially if they can't land Manny). He's going to strike out a lot, I know that. But he's also going to hit 40 home runs, drive in 100 runs and be on-base almost 40% of the time.

Starting Pitchers: Carlos Zambrano. Rich Harden. Ted Lilly. Jake Peavy. Jason Marquis. The First three are set in stone and so is No. 5 because no one wants him. The Cubs need to land Peavy like I need to land a date (seriously, I spend too much time blogging). Trade whatever prospects necessary including: Sean Marshall, Tyler Colvin, Kevin Hart, Micah Hoffpauir, Felix Pie, Ronny Cedeno...you get the point.

Relief Pitchers: Kerry Wood. Carlos Marmol. Jeff Samardzija. Neal Cotts. Angel Guzman. Chad Gaudin. Brian Shouse. Re-sign Wood. Don't question it, just do it. Hand him a blank check and let Woody do his thing. Bring in LOOGY Brian Shouse, mostly because he throws that weird sidearm kind of way. No need to tweak something that wasn't terrible unless K-Rod throws himself at you.

Bench: Reed Johnson. Ryan Theriot. Mike Fontenot. Scott Podsednik. Blanco. This is self explanatory: Pods has OF speed. Johnson can play all three OF spots. Theriot and Fontenot got the infield locked down and Blanco can catch and play first. I could write some filler text because I know that I am going to be in under 3,500 words. Blah! Blah! Blah! Bleh! Bleh! Bleh! You should really read my stuff at siuDE.com. That shameless cross-promotion was brought to you by your local Chevrolet dealer. Trust the car that Lou trusts. Trust a Chevrolet.

Oh man, I went 72 words over. Maybe I shouldn't have gotten so cocky with that bench section.

The point is that if not for the filler text, I could have made it under the 500 word mark.

Oh yeah in total this post is 813 words long.