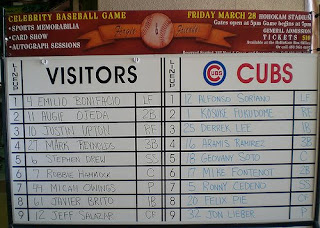 One of the fun things about having a playoff team is actually having to construct a playoff roster.

It is up to manager Lou Piniella to choose the 25 guys that will help his team win its first round playoff match, against whoever it may be.

Thankfully for Piniella, he has six games to analyze what's best for the team.

As for me, I can do that now. No hesitation.

Ready? Let's do this.

Starting pitchers:
That's the order I'd go in. Dempster over Harden only because of Demp's dominance at Wrigley Field. Jason Marquis and his 6-3 road record might squeeze in somewhere depending on the match-up. He's a long reliever only on this roster. So we're now at five pitchers

Relief pitchers:
Gaudin might be the odd man out here. He's a valuable piece to the team, but if he's not completely healthy then there's no reason for him to be on the team. Marquis can fill in that role if necessary. I'm impressed with No. 21, only because he hasn't completely collapsed in the second half.

We're now at 11 players. 11 pitchers on my staff. Let's move on to the men who carry the big sticks.

Your "everyday" line-up.
The Fuk has been in a slump at the plate, but his defense has been stellar throughout the year. You can hide him at the bottom of the order and hope the patient eye he possessed at the beginning of the year comes back in October.

Turning over the line-up for Soriano could be the key to the Cubs' postseason success.

The only player I might see getting some cuts in is Pie, because Hoffpauir and Ward are almost interchangeable. Hoffpauir is younger, but Ward is experienced so if it's a battle between the two, then it should be Ward.

Again, this all depends on who the Cubs face in the first round. I'm sure Piniella and GM Jim Hendry will put together a squad that will match-up fine against the Cubs' first round opponent.

Here's hoping I get to do one for the White Sox later this week.